Earth hit by meteor explosion 10 times more powerful than nuclear bomb, but no one noticed

19 March 2019 • International, News • No Comments
Share this article
more
On December 18, 2018, the third largest meteor explosion in the last century occurred and almost no one noticed despite it emitting the equivalent energy of 173 kilotons of TNT – 10 times more powerful than the Hiroshima bomb.

The airburst explosion happened in the skies above the Bering Sea, off Russia’s Kamchatka Peninsula. The event was detected by 16 infrasound monitoring stations around the world, which were established to detect nuclear explosions within the Earth’s atmosphere. Its smoke trail was snapped by the Japanese Himawari-8 weather satellite, which just happened to be photographing that area of the sky at the time.

Hi, fantastic post on the meteor.
I quickly checked MODIS-Terra…. they seem to have had a pass roughly at the right time (incredible coincidence!). I cropped the 250m res below or check the link.https://t.co/JJskoBkPFL pic.twitter.com/ctgB9yEcsy

The Bering Sea meteor reportedly exploded near a commercial airline flightpath between North America and Asia, though no sightings have yet been reported.

“When you see these infrasound waves, you know immediately that there has been an impact or a large release of energy,” astronomer Alan Fitzsimmons of Queen’s University Belfast told New Scientist.

NASA conducted independent research into the event using US military satellites, and was able to determine that the meteor was traveling at some 115,200kph (71,600 miles per hour) and exploded at an altitude of 25.6km (16 miles).

Using the satellite data, it is estimated that the space rock measured some 10 meters (33 feet) in diameter, with a mass of around 1,400 tons, meaning it did not meet NASA’s 140-meter lower limit for asteroids to be classified as dangerous near-Earth objects.

The 2013 Chelyabinsk explosion (440 kilotons) damaged buildings inside a several-hundred-kilometer radius, injuring 1,200 people in the process, though no deaths were reported. The Tunguska event in 1908 (3 megatons) flattened roughly 2,000 square kilometers (770 square miles) of Siberian forest.

NASA has logged 774 atmospheric fireballs since 1988, the vast majority of which exploded harmlessly above the Earth’s oceans. 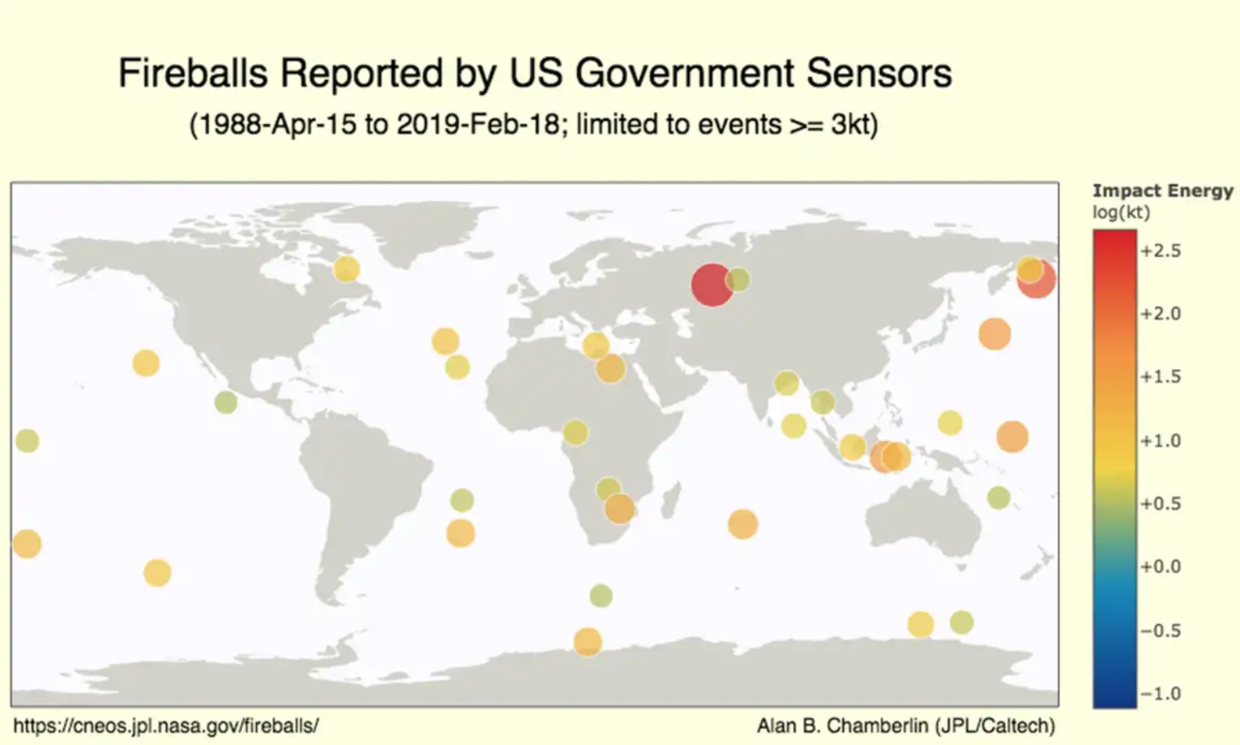