Mabare, Rwanda – It was the first week of April 1994 and a month after the start of the long rainy season. The mountain slopes were a lush green, the fields brimming with bananas, maize and sorghum plants.

Mabare, a village in Rwanda‘s Eastern Province, was an oasis of calm – but trouble was brewing.

On April 6 at around 8:30pm, as people in this lakeside village were preparing to go to bed, about 50km away a surface-to-air missile shot down a jet carrying President Juvenal Habyarimana as it prepared to land in Kigali, Rwanda’s capital.

Habyarimana  – an ethnic Hutu – was flying back with his Burundian counterpart, Cyprien Ntaryamira, after signing a peace deal with rebels from the Tutsi ethnic group in Tanzania.

The crash killed everyone on board and set in motion one of the bloodiest events of the late 20th century. Over the next 100 days, forces from the Hutu majority killed more than 800,000 Tutsis and thousands of moderate Hutus. Many were brutally hacked to death with machetes by Hutu militia known as Interahamwe, the youth wing of the then ruling party, the MRND.

Rwanda is this week commemorating the 25th anniversary of the genocide. Leaders from across the world are in the country to attend vigils and pay their respects to the victims.

For the first days of the genocide, Mabare, a Hutu-majority village, was spared. People in the village continued to tend to their farms as usual.

But then bodies, some peppered with bullets, started floating in the waters of the nearby Lake Mugesera. Some were alive but badly injured, with deep wounds from machetes. As the campaign of violence began spreading from Kigali throughout the country, it became apparent to Mabare’s residents that it was only a matter of time before they also came under attack.

Led by the imam of their only mosque, Rashid Bagabo, the residents decided to act.

Using his small boat, the imam began collecting the bodies from the lake while young men from his mosque set up barriers at the two unpaved roads that cut through their village in a bid to obstruct the attackers’ access.

“Our religion teaches us to save lives not take lives,” Bagabo, 56, told Al Jazeera. “It teaches us that if you save one life it is like saving the whole humanity. So it was easy for me to do something.”

‘There was nowhere to stand’

Slowly, the mosque filled up – young and old, men and women, Muslims and Christians all took shelter.

“People were being killed everywhere,” Bagabo said. “Thousands were being killed in churches. Some church leaders were taking part in the genocide. There were three churches in our village but people were scared to go there. So they felt safe coming to our mosque.”

Muslims made up less than a quarter of the population of the small village of about 500 people. But at the height of the genocide, more than 500 came to the mosque, including people from nearby areas in search of safety.

“There was nowhere to stand. Every little space, there were people,” the imam recalled. 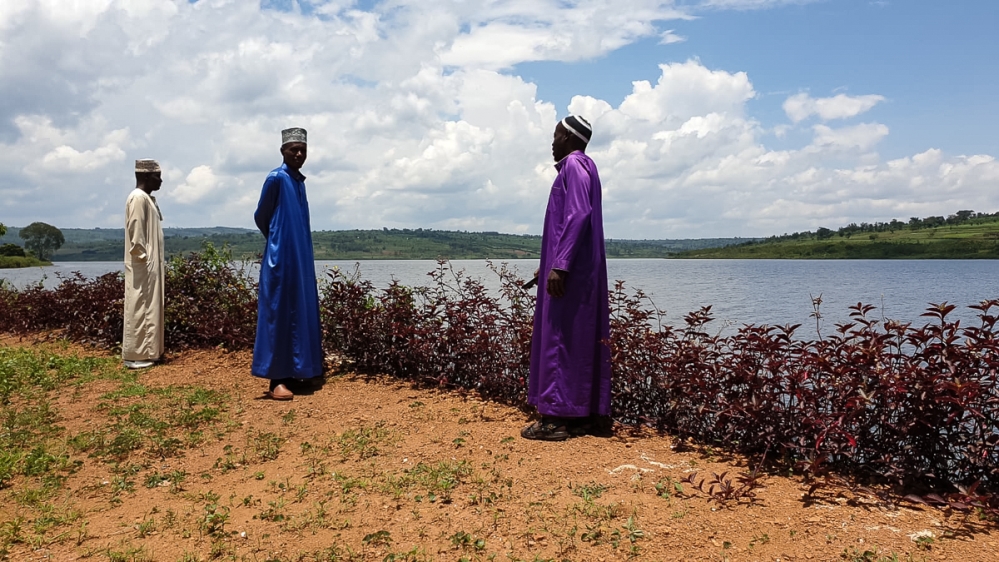 Muslim leaders from the community next to the lake where they used to collect dead bodies [Image Source: Al Jazeera, Photo Credits: Hamza Mohamed]

Abdul Karim Rugwiza was one of the then young men tasked by the imam to man the roadblocks.

“Our job was to delay the advance of the Interahamwe so we could give people time to flee and hide in the bushes,” Rugwiza, 59, told Al Jazeera.

It was not just men from the Muslim community who were trying to stop the bloodshed in the village. The women from the mosque decided to offer first aid and basic medical treatment to the wounded being brought there.

“There was 20 of us women,” Mwanaidi Kampire said.

“We did our best to help the injured. We were farmers and housewives before the genocide – but that changed,” she added.

“People were brought to us from everywhere. We could not help everyone because some had injuries we could not treat,” she added.

Twenty-five years later, Kampire is still haunted by what she witnessed.

“We saw people, babies and old women, who were cut up using machetes by their own neighbours. They did nothing to them. I still cannot understand how anyone can do such a thing,” she said.

Barricaded in the mosque

On April 13, a week after the start of the genocide, a group of about 100 heavily armed Interahamwe attacked the village. The young villagers at the checkpoint tried their best to halt their advance.

“We had nothing. Just rocks, sticks and some of us had spears. The Interahamwe had guns and grenades. There was no way we could stop them,” Rugwiza said.

“We threw stones at them and they threw grenades at us. Some of my friends were killed trying to stop them. We run to the mosque and told everyone to run.”

Many escaped to the bush. Others, traumatised physically and psychologically from surviving previous attacks in other villages, decided to barricade themselves in the mosque. Almost 300, mostly women and children, stayed put.

When the militia got to the mosque, located at the far end of the village by the lake, they were short on bullets.

One by one, they started hurling grenades. Of the nearly 300 people who barricaded themselves in the mosque, only eight survived.

Pierre Ngarambe, a local Christian who had sought refuge in the mosque, was one of the lucky few to survive the grenade attack. 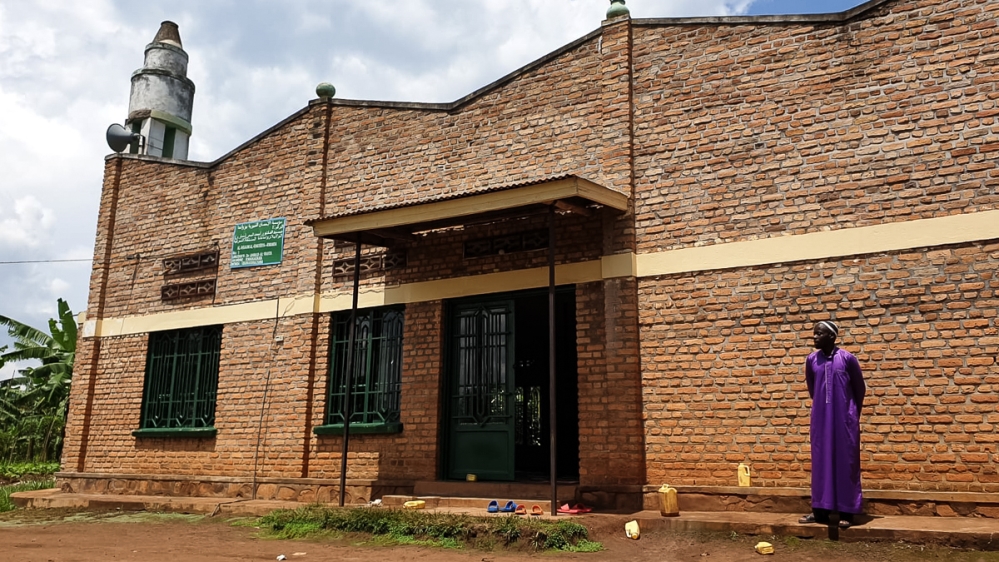 “I survived but lost my wife and seven children in the attack. Our Muslim brothers did everything to keep us safe. I cannot thank them enough. Until the last moment they were trying to get us out to safety,” the 65-year-old said.

The imam also survived the attack but others close to him, including his nephews, didn’t.

“I was away taking some old people to safety when it happened. I was about 3km away. My deputy, Said Ndagira, was killed protecting the people in the mosque,” the imam said.

Today, the village has a new mosque a short distance from where the old one stood. Survivors and residents say the horrific events a quarter-of-a-century ago have further united the community.

“We are now in the process of building a wall at the old mosque with the names of the people that died. They are not here with us but we haven’t forgotten them or what happened.”

Bagabo, the former imam, has been honoured as a hero by the government for his role in saving lives in his village during the genocide.

“I was just doing what my religion tells me to do. I don’t think I’m a hero. The heroes are the ones who are not with us today,” he said.