European signatories to the Iran nuclear deal do not see Tehran’s recent moves reducing compliance as significant and do not intend for now to trigger the pact’s dispute mechanism, the European Union’s foreign policy chief has said.

Speaking to reporters after a meeting of EU foreign ministers in Brussels on Monday, Federica Mogherini urged Iran to acknowledge the work undertaken by France, the United Kingdom and Germany to save the 2015 agreement – also signed by China and Russia – after the United Statesunilaterally withdrew from it in May last year.

Since then, Washington and Tehran have been embroiled in a bitter war of words and tensions in the Gulf region have soared amid the former’s imposition of punishing sanctions as part of a so-called “maximum pressure campaign” against Iran’s leaders, who have responded by gradually reducing compliance with the nuclear deal.

“We invite Iran to reverse its steps and go back to full compliance with the agreement,” said Mogherini.

“The reality is that the deal has avoided Iran developing a nuclear weapon, and so it has been effective. I think everyone today recognises there is no alternative to this deal… As an international community at large, it is key to keeping the situation as calm as possible in the region,” she said.

Tehran’s moves to scale back its obligations under the deal, which promised sanctions relief in exchange for curbs on Iran’s nuclear programme, include enriching uranium to a higher level of purity and building stockpiles of nuclear fuel.

Iran’s leaders have said the Islamic republic will come back into full compliance if European powers ensure it can sell oil on global markets – a revenue stream blocked by the US sanctions regime – and protect the country’s faltering economy from the measures rolled out by Washington following US President Donald Trump’s decision to abandon the deal.

Mogherini said the remaining parties do not intend to invoke the deal’s mechanism to punish non-compliance for now, adding that current data from the UN nuclear watchdog did not indicate Iran’s recent steps “to be significant non-compliance”.

Separately on Monday, France’s Foreign Minister Jean-Yves Le Drian said Europe had to remain united in trying to preserve the deal and convince Tehran to reverse its decision not to comply with parts of the accord.

“The Europeans have to stay united on this issue,” Le Drian told reporters, before adding that both Iran and the US “had made bad decisions”.

Iran’s decision to reduce compliance with the deal that the US abandoned last year was “a bad response to a bad decision”, he said.

Al Jazeera’s Dominic Kane, reporting from Brussels, said: “As it stands, the E3 – that’s France, the UK and Germany – plus the rest of the EU, believe Iran is still within the terms of the deal.”

“The ways in which Iran may have violated the deal are still minor enough that they don’t need to invoke those special measures – that’s what they’ve been saying all day, presenting this united front,” he added.

Fellow signatory China meanwhile called on all parties to remain committed to the nuclear deal and said the US should respect the interests of others and abandon its maximum-pressure approach, describing it as the root cause of recent developments.

“All parties should keep calm and exercise restraint and stay committed to solving problems through dialogue under the framework of a comprehensive agreement,” foreign ministry spokesman Geng Shuang said, before adding it was “better for the one who made the trouble to fix it”.

China and Russia have both previously accused the US of pushing Iran into a corner over the accord.

But Trump-ally and critic of the deal Israeli Prime Minister Benjamin Netanyahu slammed the European signatories efforts to save the agreement, comparing the moves to “European appeasement in the 1930s” of Nazi Germany.

Netanyahu, a longtime critic of regional rival Iran, charged that some leaders “won’t wake up until Iranian nuclear missiles fall on Europe”.

The meeting in Brussels came a day after France, Britain and Germany warned the deal could collapse.

The countries’ joint statement, released on Sunday by French President Emmanuel Macron’s office, called on “all stakeholders to pause, and consider the possible consequences of their actions”.

It added: “We believe that the time has come to act responsibly and to look for ways to stop the escalation of tension and resume dialogue.”

Al Jazeera’s Dorsa Jabbari, reporting from Tehran, reiterated that Iran’s leaders were committed to reneging on the accord unless Europe did more to deliver Tehran the promised benefits of the deal, however.

“We’ve heard from the spokesman of Iran’s atomic energy organisation, who said Iran will go back to its pre-2015 nuclear activities if Europeans don’t show they are truly committed to the deal,” Jabbari said.

“There is a sense of urgency among Iranian officials – they don’t really believe the Europeans are serious about this deal any more; they are looking for concrete action from the remaining signatories to the deal,” she added.

“The Iranian President, Hassan Rouhani, has praised Foreign Minister [Mohammad] Javad Zarif’s team, saying with this one single agreement, the Iranians were able to abolish six UN Security Council resolutions against them – so this is a really serious deal for them.”

In recent weeks, the three European parties to the deal confirmed that a new financial mechanism designed to enable European and Iranian companies to trade without any direct financial flows – thus bypassing the US financial system – was operational.

However, the scope of the workaround vehicle, called INSTEX (Instrument in Support of Trade Exchanges), is initially confined to humanitarian products such as medicine, medical devices and food, which are not directly targeted by US sanctions.

READ MORE:Iran ‘ready for talks’ with US if sanctions are lifted

Diplomats have said that, in any case, they fear US blowback, while Iranian officials have repeatedly said INSTEX must include oil sales or provide substantial credit facilities for it to be beneficial.

“This announcement is not something the Iranians wanted to hear,” said Al Jazeera’s Jabbari.

“INSTEX has been talked about for a long time, but unless Tehran can sell its oil on main global markets, then INSTEX isn’t what they’re looking for. The Iranians say this is the main cause of the dispute. If it doesn’t deal with oil sales, it’s pointless for them because it doesn’t solve any of their concerns, and they’re urging the Europeans to pressure the US to end those sanctions.”

Al Jazeera’s Kane added: “[Mogherini] was saying ‘give this scheme the time to get up and running and it will help ease the pain’. She was also saying that Iran needs to not commit any more minor infractions of the deal.”

Rouhani said in a televised speech on Sunday that Tehran was ready to hold talks with Washington if the US lifted the sanctions and returned to the nuclear deal. But Trump has shown no sign of backing down and said last week he would push on with yet more sanctions.

The nuclear diplomacy is a central issue in a wider confrontation between the United States and Iran.

In recent weeks the dispute has taken on a military dimension, with Washington accusing Tehran of attacks on oil tankers in the Gulf. Last month, Iran shot down a US drone which it said had violated its airspace, prompting Trump to order retaliatory air raids on Iran, only to cancel them at the last minute. 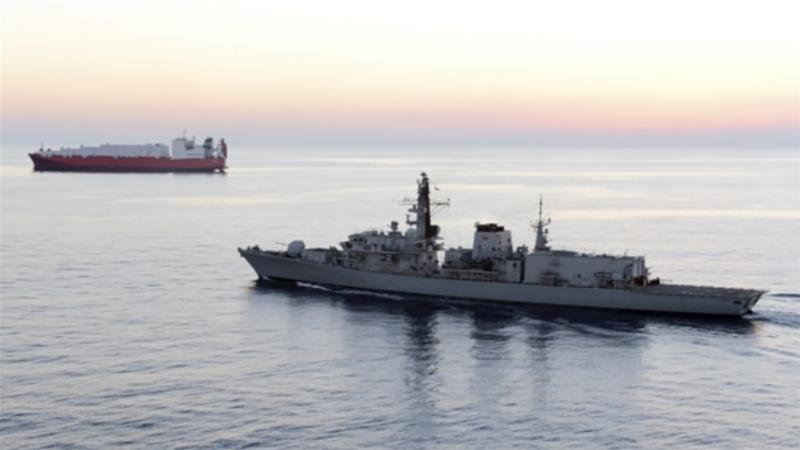 INSIDE STORY-Will there be another war in the Gulf?