Iraq protesters block roads as they step up calls for reform

Protesters closed large roads in cities across Iraq on Sunday night, escalating their campaign for political change, as the clock ticked down the final hours to their deadline for the government to meet their demands for reform.

On Baghdad’s Palestine Street, young men hurled Molotov cocktails onto the Mohammed al-Qassem highway overpass, as they attempted to block the road late into the night. For several hours the demonstrators goaded police, banging railings with sticks and metal poles, retreating only temporarily when security forces fired tear gas canisters towards them.

A nearby garage forecourt functioned as a first aid centre, with volunteer medics treating protesters for exposure to tear gas with saline solution, before packing them off to the overpass once more.

AFP news agency reported that 10 people had been injured in Sunday’s skirmishes.

Roads were also blocked in al-Diwaniyah, Sumaria and Wasit.

Road closures and demonstrations had been expected for Monday, by which time a deadline set by demonstrators in the city of Nasiriya, for a new prime minister and government to be announced, would have passed.

The deadline and its demands announced last week were quickly adopted by protesters from across the country.

The demands include a new electoral law, and a new prime minister to replace Adel Abdul Mahdi who, despite resigning two months ago, remains in office.

Anticipating its failure, many in Baghdad seemed unwilling to wait.

“We all know they aren’t going to meet it, the only way they take us seriously is if we cut the roads, and disrupt the city – it’s our weapon,” said Zaid Ali,19, who had travelled from Basra in the run-up to Monday’s escalation.

“They have had their chance, they have had many chances – 17 years of chances. There will be no extension,” he added.

“I hope they are committed to peace, not to harm the security of the people and to subject the country to a fierce civil war,” read a statement posted on his Twitter feed. 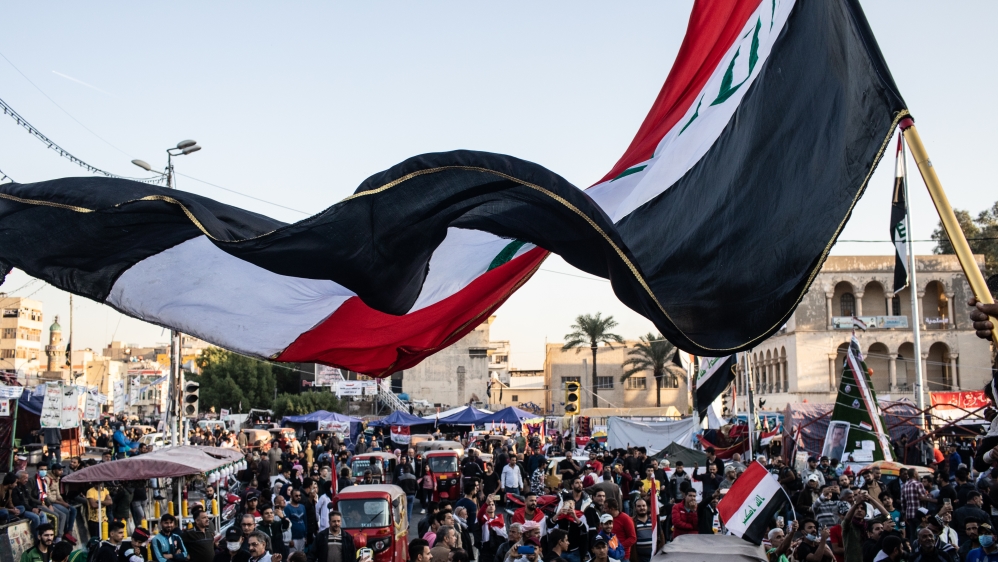 Adding, “I respect the government’s decision – if any – to confront saboteurs and riots, but a distinction must be made between peaceful (protesters) and saboteurs”.

It came after Sadr called on his followers to take to the streets on Friday in a million man march.

Many of the people in Baghdad’s Tahrir Square are deeply sceptical of Sadr’s motives, fearing he may attempt to hijack the popular protest movement for his own gain.

“I will die before I march behind his banner. I have been here for three months, sleeping in the cold, facing danger – I did not do that for him,” he added.

“He [Sadr] will try to wipe us off the map, if the Sadrists come to Tahrir, we will fight back,” warned Hamoud Ali, 32.

In a sign of what may be to come, Basra Governor Asaad Al Eidani said his security forces would not allow the suspension of regular working hours or the closure of schools as a result of protests.

Further demonstrations are expected across the country from Monday, as demonstrators attempt to regain the initiative almost three weeks after the killings of al-Muhandis and Soleimani.

Many worry that the demands of the thousands who have demonstrated since early October, might be forced off the political agenda in the wake of United States President Donald Trump’s decision to assassinate the two military leaders.