Kabul, Afghanistan – Small pieces of meat hang in the front area of Zia Gul’s tiny mud house, drying in the scorching August sun. This is all that the 35-year-old mother of six, and a resident of Nasaji camp for internally displaced persons (IDPs) in eastern Kabul, can offer her family on Eid al-Adha.

This year, the residents of the camp have been all but forgotten by the better-off part of society. Zia Gul’s children received small portions of meat from strangers on the streets, but the family decided to dry most of the food and keep it for winter.

Eid al-Adha, one of the most important Islamic festivals, is celebrated across the Muslim world to commemorate Ibrahim’s readiness to sacrifice his son according to God’s command. Before Ibrahim made the sacrifice, however, God sent him a lamb to kill instead.

During the Feast of Sacrifice, Muslims traditionally slaughter animals, such as goats, sheep and cows and divide the meat into three portions, keeping one to themselves and sharing the other two with their close relatives and those in need.

“This year, we’re all wearing old clothes. We don’t have new ones to wear. I’m not in my village and we don’t have any money,” says Zia Gul, whose family left their home in the Khogyani district three years ago after ISIL killed the woman’s two-year-old son. “We don’t celebrate Eid this year, we can’t even afford to buy bread.” 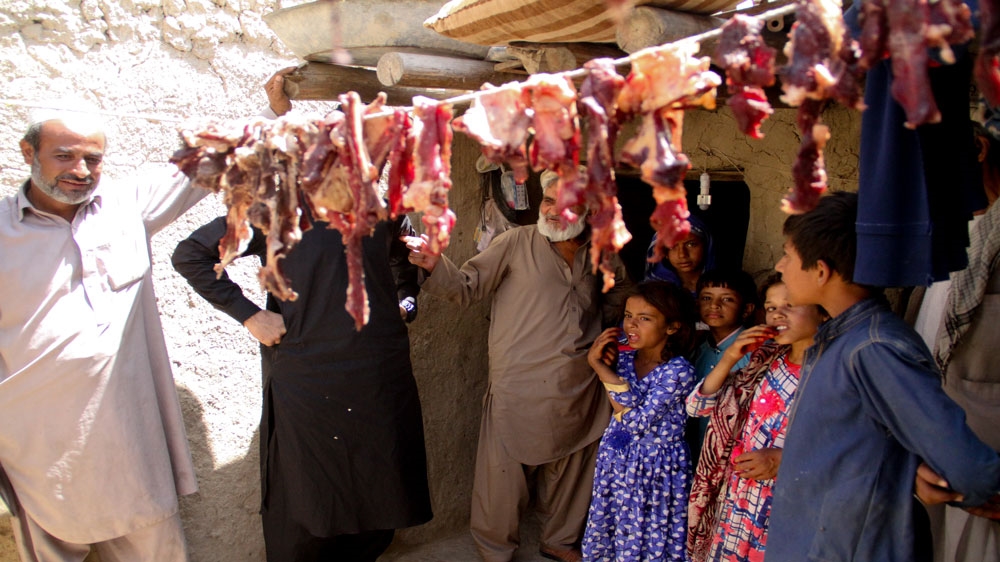 Zia Gul: ‘This year we’re all wearing old clothes. We don’t have new ones to wear’ [Agnieszka Pikulicka-Wilczewska/Al Jazeera]

Over the years, as a result of a long-running war, economic hardship and natural disasters, almost 2.6 million people in Afghanistan were forced to leave their homes and became internally displaced, according to data by the Internal Displacement Monitoring Centre.

Between January 1 and July 30 this year, more than 206,000 new people have faced displacement, the United Nations Office for the Coordination of Humanitarian Affairs says. Those forced to flee their homes most often find shelter in provisional camps spread across the country.

The Nasaji camp, home to almost 1,500 IDPs, looks different on sacrifice day. Local children put on their best clothes, some of them even jewellery, and joyfully roam around the camp’s well, the only playground they know.

But for Inzar Gul Safi, who manages the community’s affairs, the mood is different. The lunch in his home today was modest, as this year no one has shared food with his family and most of the camp’s residents.

“In the past, sheep and goats slaughtered in Saudi Arabia for Eid were brought by the pilgrims to the Ministry of Refugees which used to distribute the meat in the camps. It used to be whole animals. It was sponsored by the government of Saudi Arabia, but two years ago they have stopped that,” says Inzar, 52, who has lived in the camp for the past 12 years.

“It’s poor people’s Eid. The bread we are eating is four days old. Eid is for wealthy people who go for Hajj, not for us. We only eat whatever we have left or whatever people bring us.”

The situation of the camp’s residents has been steadily deteriorating. According to Inzar, for the past three years, they have received little support from the numerous NGOs working in the country. Last year, the Norwegian Refugee Council built several toilets in the camp, but it has not been enough for the residents’ needs.

The government, caught in fighting against the Taliban, has also largely neglected the situation of IDPs despite earlier promises of support, camp residents say. They have no opportunity to educate their children or find sustainable employment and there are no clinics which accept patients from the camp for an affordable price. As a result, many die without receiving specialist help, including during childbirth.

“All IDPs we’ve spoken with remain angry with the government for lack of support. They especially blame [President] Ashraf Ghani who promised IDPs that if they were to vote for him, they would receive plots of land and support, none of which Ghani followed through with according to IDPs at Kabul’s various camps,” Mohammed Harun Arsalai, writer, activist and cofounder of Documenting Afghanistan project told Al Jazeera. 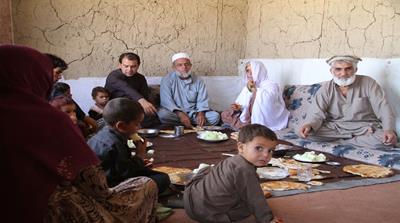 Inzar Gul Safi: ‘I just want the government to take care of the families of the people who perished in war’ [Agnieszka Pikulicka-Wilczewska/Al Jazeera]

“The IDPs and those who were forced to return from Pakistan have been abandoned by the government. Their only means of support is generally the NRC and charity from Kabul locals. The UNHCR (United Nations refugee agency) also provides support, like tents, but has failed miserably at IDP support efforts.”

The ongoing peace negotiations between the United States and the Taliban, which might bring the end to the decades of fighting, do not fill Nasaji camp residents with hope either. Since most of them have lost everything, peace itself, without government support, is unlikely to improve their situation.

“Even if the peace comes, why would I go back to my village? I don’t have the money to build a house, or buy land to grow crops. All we had in this world in the last 20 years we had lost. We sold our land and everything we had. So we can’t go back to our village,” Inzar says.

Meanwhile, many camps, most of which are located on state land, have experienced pressure not to expand further. In Nasaji, new buildings were once destroyed during the night by people connected to the government, according to residents.

“I just want the government to take care of the families of the people who perished in war, the disabled, and provide us with shelter. We need employment for the youth so that they do not join the Taliban. If we have jobs ourselves, we will not have to take any aid from America or NGOs,” Inzar says.

“We are not receiving any aid right now, not even clothes for our children. Some of them don’t even have shoes, they only have Allah. We hope that our situation will improve, but so far, it has only been getting worse.”

Tributes continue to pour in for marhoom Moulana, Taha Karaan