Jacob Zuma to remain in hospital

Zuma who was serving a 15 month jail sentence for contempt of court after ignoring a Constitutional Court order to appear before the State Capture Commission was granted medical parole on Sunday because of ill-health.

He was admitted to hospital soon after his incarceration on July 8.

Nxumalo says, “There are conditions attached to it that he’ll have to comply with but for now we must indicate that he remains in hospital up until such time that doctors discharge him then he can be taken home where he will continue to receive medical care. But a decision had to be taken looking at the medical reports that he had to be considered for medical parole.”

A statement from the Justice and Correctional Services Department says that the medical parole’s eligibility for the former President “is impelled by a medical report received by the Department of Correctional Services. Apart from being terminally ill and physically incapacitated, inmates suffering from an illness that severely limits their daily activity or self-care can also be considered for medical parole.” 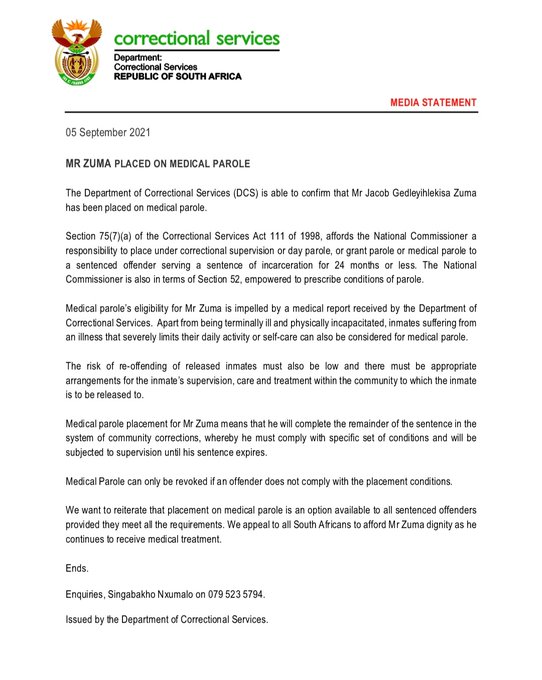 The former President will be expected to abide by some of the conditions during his parole.

“Medical parole placement for Mr Zuma means that he will complete the remainder of the sentence in the system of community corrections, whereby he must comply with a specific set of conditions and will be subjected to supervision until his sentence expires.”