Khartoum sit-in may be gone, but its dream of a democratic Sudan remains

Khartoum, Sudan – In front of the military headquarters in Sudan‘s capital, Khartoum, military trucks carrying armed soldiers lined both sides of the street. The ground was covered in ash, while the walls to the sprawling complex had a fresh coat of paint.

The streets were once again open to traffic, and despite a steady stream of vehicles, the mood in the area was solemn – a stark contrast to the vibrant atmosphere there just 10 days ago.

Back then, in place of the ashes, there were white tents occupied by hundreds of pro-democracy protesters. The walls carried murals and artwork that reflected creativity oppressed by 30 years of autocratic rule by President Omar al-Bashir.

The roads were full of people of different ethnicities – men and women, young and old – some attending political debates, others listening to protesters performing revolutionary songs.

Those scenes came to an abrupt end on June 3, when soldiers raided the protest camp at dawn. Soldiers, who outnumbered the crowds there, opened fire on protesters who, as they tried to flee, screamed and stumbled on makeshift barricades they had set up to guard against such an attack.

As the troops advanced, they set fire to the tents and beat anyone they could get their hands on. More than 100 people were killed, according to doctors, and some of their bodies disposed of in the Nile River, bringing an end to a weeks-long sit-in that had triggered the military’s overthrow of al-Bashir on April 11.

The bloody crackdown did not come as a surprise for many protesters. For weeks after al-Bashir’s removal in the wake of mass protests, the generals that replaced him had dragged their heels on ceding power to civilians. So for the protesters, it was only a matter of time before the military made a move to end the sit-in.

I was at the protest site a day before the raid. I did not know then that I was witnessing its final hours.

Walking in, I heard the steady drumbeat of rocks banging on metal. The din, which only stopped once a day for the national anthem to be sung as the sun rose every morning, came to be known as the beat of the revolution.

There were people having tea and chatting with friends. Most of them were part of the “night-shift”, tasked with guarding the sit-in, which began on April 6 after nearly four months of nationwide anti-government protests. As I made my way to meet a group of acquaintances, I could hear different revolutionary songs coming from various corners. And just a few metres from where I found a seat, a cultural dance group was performing.

Some of the people I sat with commented on how they were unaware of the different cultures in Sudan despite having lived there for all of their lives.

Such was the beauty of the sit-in. Outside the camp, there was a country divided by race, class and religion. But inside, everyone was united by a vision of a democratic Sudan.

Yet there was always a fear that the sit-in may not last.

“How do you think they’ll disperse you when they do come for you?” I asked one female protester.

“They’ll shoot us,” she replied after hesitating a bit, almost as if she did not want to picture the scene but knew the possibility was not far-fetched.

“Not all of us,” she continued. “They’ll leave enough alive and so traumatised that they won’t be able to stand up and continue with the revolution.” 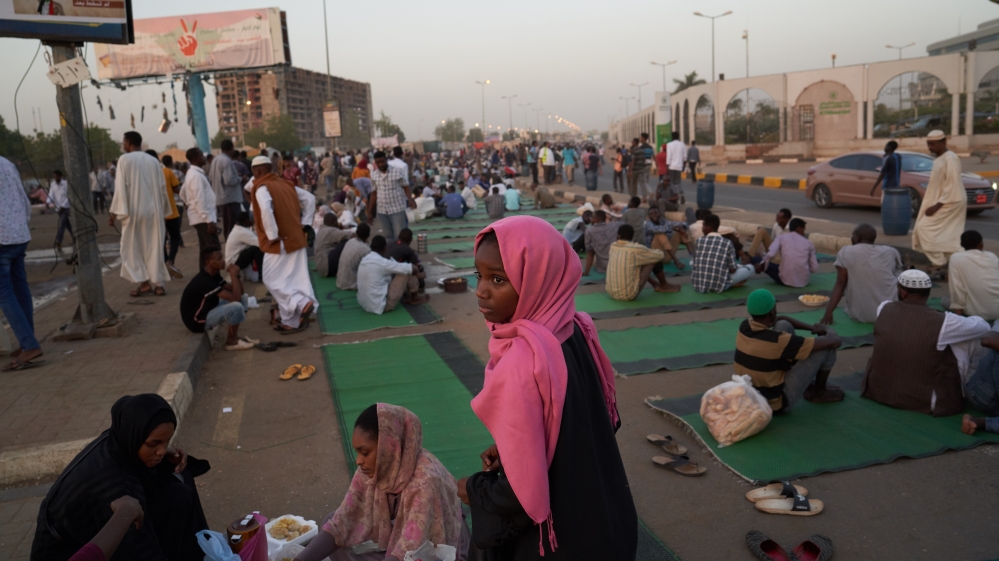 We then spoke of how it all started and how far the protest movement had come – from when it initially began as scattered demonstrations in neighbourhoods and towns in December, before spreading across cities and culminating in the sit-in which, after just five days, led to al-Bashir’s removal.

The sit-in also forced the ruling Transitional Military Council (TMC) to negotiate with the coalition of protesters, known as the Alliance of Freedom and Change Forces, to try and form a transitional government.

‘Until the last martyr’

We continued to chat deep into the night, switching to more cheerful subjects such as the artwork on the walls, the libraries on site that gave people access to books banned under al-Bashir, the chants of the protesters and their hopes and dreams for the future.

These protesters were Sudan’s future – youth with passion and love for the country and a desire to improve it, and not let race, religion and class divide them.

When I left at dawn, I stopped to take photos of the artwork on the walls. Little did I know that would be my last glimpse of the sit-in.

The next day, at around 5am local time (03:00 GMT), soldiers from the feared paramilitary Rapid Support Forces (RSF) raided the sit-in.

I sat in my room, watching live footage of people running from the hail of bullets. One video showed a protester who guarded one of the barricades I had passed several times on my way to the sit-in. He had been shot and was covered in blood, stumbling many times as he tried to escape.

The bloody scenes were beyond heart-breaking.

The raid ended with the dispersal of the protest camp, a victory for the RSF and the TMC.

But just hours later, protests began again in different parts of the country. People went back to setting up makeshift barricades in neighbourhoods, just like they did when the demonstrations first started in December.

The protesters’ defiance, however, was met again with violence.

Over the following days, the RSF and army removed the barricades and shot anyone who guarded them. More people were killed and reports surfaced of women being raped during the sit-in’s dispersal. But the opposition alliance continued to resist, launching a general strike that paralysed parts of the capital and other cities.

“We’ll continue until the last martyr falls,” said one man I spoke to on my last night at the sit-in when I called to check on him and ask if he thought it was all over.

Days later, as I drove by the site of the sit-in, all evidence it had ever stood there was either removed or being removed.

The sit-in may be gone, but it’ll always be the place that brought together people who dared to think of a different Sudan, a democratic Sudan. No amount of paint will whitewash that memory.