The Philippines reported the first death outside China on Sunday from a new coronavirus that has now killed at least 304 people, infected thousands and spread to dozens of other countries.

The man who died in the Philippines was from Wuhan, the central Chinese city where the coronavirus is thought to have originated late last year. He was 44.

“This is the first reported death outside China,” Rabindra Abeyasinghe, the World Health Organization (WHO) representative to the Philippines, told reporters.

“However, we need to take into mind that this is not a locally-acquired case. This patient came from the epicentre of this outbreak,” Abeyasinghe added.

In China, the authorities announced earlier that the death toll had risen to 304 in the 24 hours until midnight on Saturday, with the new deaths all reported in the hard-hit central province of Hubei.

China is facing mounting isolation as countries step up travel restrictions and airlines suspend flights to and from the country. Many have pulled their citizens out of Wuhan in emergency airlifts, while China has laid on flights to bring its nationals home from overseas holidays.

More than 130 cases of the infection have been reported in some 24 other countries, mostly among people who recently travelled to or were visiting from Hubei province.

The man who died in the Philippines had been admitted to hospital in Manila on January 25 and died on Saturday.

“Over the course of the patient’s admission he developed severe pneumonia,” Health Secretary Francisco Duque said. “In his last few days, the patient was stable and showed signs of improvement. However, his condition deteriorated within the last 24 hours, resulting in his demise.”

The man was the partner of the country’s first reported case – a 38-year-old woman who had arrived from Wuhan and was not showing any symptoms. She remains in stable condition in hospital.

After the death was announced, Philippine President Rodrigo Duterte ordered a wider travel ban including people from mainland China, Hong Kong and Macau, according to his adviser, Senator Bong Go. The country had previously announced it would not allow direct arrivals from China.

The infected couple arrived in the country on January 21, via Hong Kong, and had visited the islands of Cebu and Negros before arriving in Manila.

“Who knows how many people are actually exposed to the coronavirus,” Dr Vin Gupta, a faculty member at the University of Washington Medical Cente in Seattle who specialises in pulmonary critical care, told Al Jazeera.

“If it’s true that if you are asymptomatic that you can still transmit it – and major studies and medical journals have confirmed that – then the transmission pattern is unlike anything we’ve ever seen previously with a droplet or airborne flu. This is different. This is concerning.” 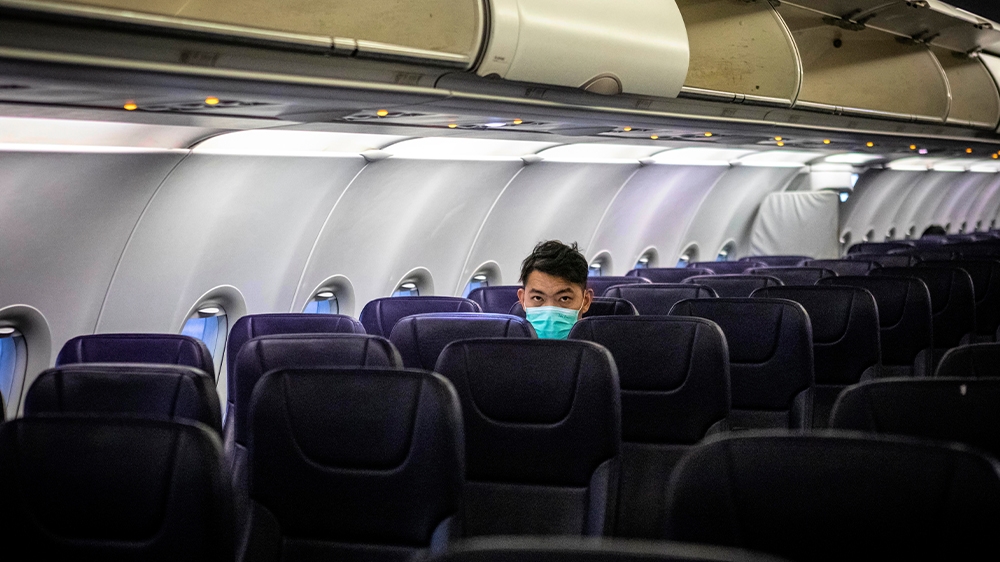 A passenger has the aircraft almost to himself on the way to Guangzhou from Sihanoukville, Cambodia. Countries have imposed severe restrictions on travellers from China and airlines have suspended flights amid a slump in demand [Alex Plavevski/EPA]

The WHO this week declared the outbreak a public health emergency of international concern, and said global trade and travel restrictions were not needed.

Singapore and the United States announced on Friday they would ban foreign nationals who have recently been in China from entering their territories. Australia followed suit on Saturday. In Hong Kong, medical workers are threatening to strike and are demanding the border to the mainland be closed.