Finance minister Enoch Godongwana announced the Treasury has allocated R58.6bn in the medium term for the disbursements of social grants, including the temporary R350 social relief of distress grant introduced in 2020.

He tabled his budget speech in parliament on Wednesday, two weeks after President Cyril Ramaphosa’s state of the nation address.

Ramaphosa announced the extension of the grant in his speech, saying this should be done in a manner that will not affect service delivery.

The minister said the department of social development received a huge chunk of the budget, with R44bn set aside for a one-year extension of the social relief of distress (SRD) grant until March 2023.

The grant was introduced by Ramaphosa to alleviate poverty among unemployed youth and individuals who could not look for jobs at the height of the Covid-19 pandemic.

The extension of the grant added to the country’s already extensive social relief safety net, as SA now pays grants to over 46% of its population, said the minister.

Godongwana also committed to “a new extended child support grant for double orphans” and “to provide for inflationary increases to permanent social grants.”

The minister said introducing a permanent social relief of distress grant would only be sustainable through revenue increases and reduced spending. 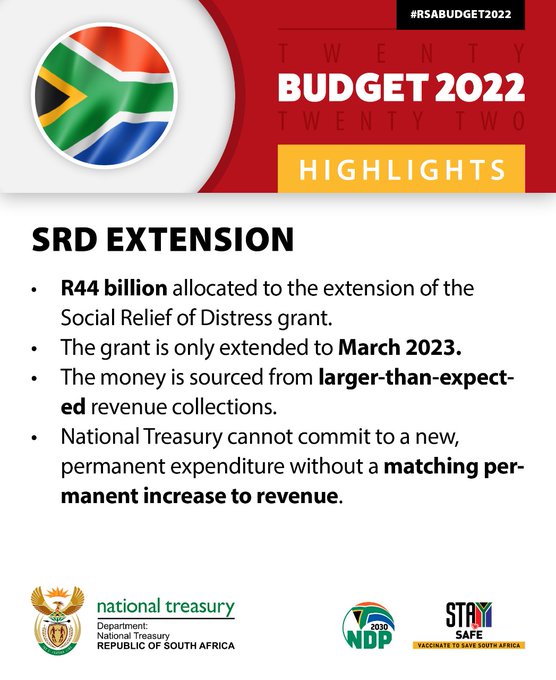