Cox’s Bazar, Bangladesh – At least once a year, the Asian elephants living in southern Bangladeshmigrate eastwards, passing through the forest that straddles the border with Myanmar.

Because this area is sparsely populated, the elephants usually encounter little trouble beyond a few run-ins with local farmers when their crops are trampled.

Now, however, the world’s largest refugee camp sits in the middle of their migration path.

Since August 2017, more than 700,000 Rohingyahave fled their native Myanmar amid a violent crackdown by the Myanmar army. A mostly Muslim minority, they have been persecuted for years.

While around 300,000 Rohingya were already living in Bangladesh, having fled Myanmar during other crackdowns in the 1970s and 1990s, the most recent exodus is of an unprecedented scale.

In a matter of weeks, much of the forest in the border area, between the towns of Cox’s Bazar and Teknaf, was torn down and replaced by a sea of tarpaulin shelters.

Now home to around one million people, the Rohingya refugee camps are densely populated. Problems include disease, overcrowding, a lack of sanitation and vulnerability to natural disasters.

The sudden emergence of a camp in what was once forest has also created problems for local wildlife. Perhaps no animals have been more affected than the elephants.

“This camp didn’t happen gradually,” says Raquibal Amin, Bangladesh representative for the International Union for Conservation of Nature (IUCN), “there was no time for elephants to adjust.”

Between 35 and 45 elephants are trapped in Bangladesh, unable to follow their usual migratory route into Myanmar – around 15 percent of Bangladesh’s entire elephant population, according to the IUCN.

“Elephants have genetic memories,” says Amin, “so they follow the same path, again and again, generation after generation.”

As a result, elephants are still trying to follow their usual migratory route through the refugee camp – often with dire consequences.

Since September 2017, 14 Rohingya have been killed by elephants. Others have been injured. 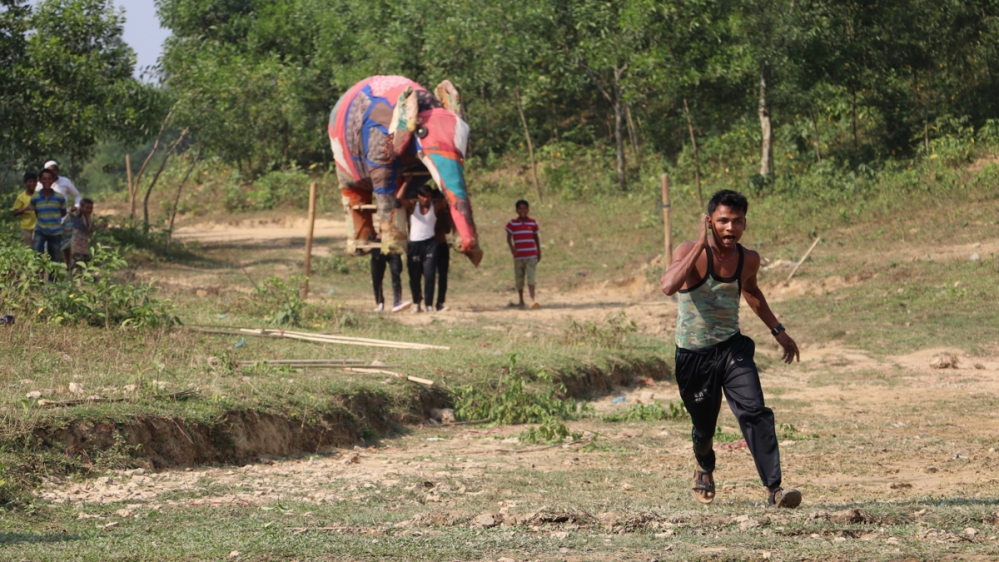 The elephant tusk force demonstrates to their community how not to react if an elephant comes into the camp [Image Source: Al Jazeera, Photo Credits: Susannah Savage]

Finding a way to allow the elephants to pass through while preventing further casualties has proven challenging.

IUCN and UNHCR, the UN agency for refugees, say a corridor between three and four kilometres wide would need to be carved out through the camp, requiring at least 24,000 shelters be moved.

“That’s a logistical issue, not to mention an ethical one,” says Amin. “It would involve clearing more forest for those people to move to, creating another environmental dilemma.”

Even if the corridor’s location was altered to avoid such an upheaval for the refugees, another hurdle remains.

“The border between Myanmar and Bangladesh is lined with barbed wire now, and there are landmines, too, it seems,” says Amin. “We heard that two elephants have died already because of landmines.”

The IUCN and UNHCR have attempted to broker a deal between the governments of Bangladesh and Myanmar to find a way to let the animals cross.

“Elephants are a non-politically sensitive issue, after all,” says Amin.

But so far, they have been unsuccessful. 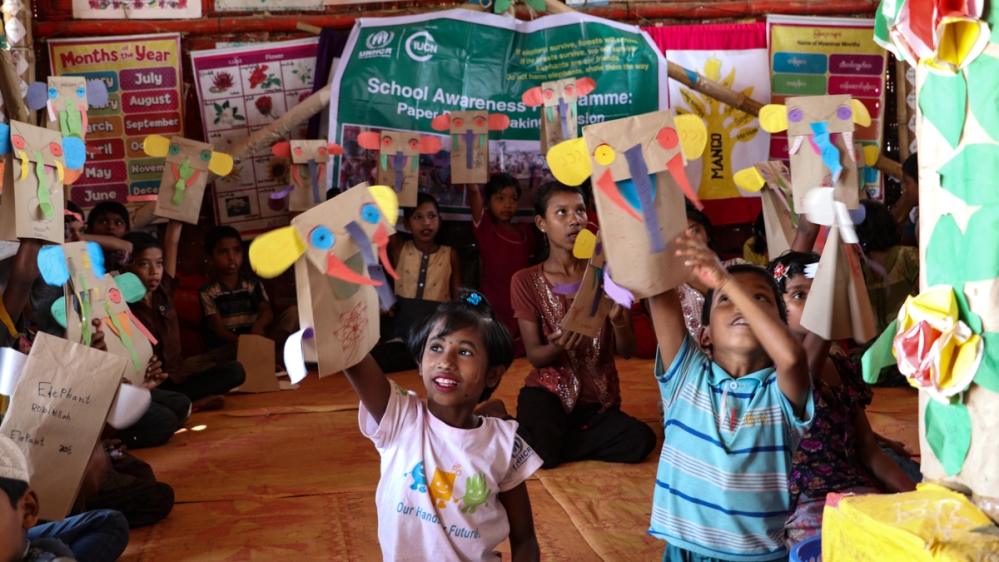 The number of elephant deaths has plummeted from 13 between September 2017 and February 2018  to just one in the past year, even though the number of times elephants attempted to enter the camp has remained high.

This is thanks to the aptly named elephant tusk force – “pun intended”, says Chris Melzer of UNHCR.

Comprising a passionate group of Rohingya refugees, the group is trained by UNHCR and IUCN to respond safely to elephants in the camp.

“Their success is remarkable,” says Melzer.

Watchtowers built throughout the camps are manned around the clock by two members of the tusk force. Equipped with torches and megaphones, these volunteers sound the alarm and alert the other members of their team if they spot an elephant.

“The most important thing,” says Mohamad Saddiq Hossain, one of the tusk force leaders, “is not to intimidate the animal.”

Instead of throwing sticks or confronting the animal aggressively, which might “antagonise the elephant”, the volunteers use lights and sounds to gently push the elephant back.

“The elephant is very, very intelligent,” says Amin. “The trick is to change your tactics, to keep them guessing all the time, rather than be predictable.”

Another element of the volunteers’ work is educating community members about elephants and what to do if one comes into the camp.

One way is by staging a drill using a puppet elephant created for this purpose.

The brightly coloured life-size puppet, steered by three puppeteers, charges into the camp from the nearby trees, accompanied by elephant sound effects.

In the first run-through, the tusk force volunteers run around wildly, shouting and screaming and throwing objects, showing onlookers what not to do.

In the second demonstration, they calmly form a line and slowly approach the elephant with their torches.

“The puppet itself is a masterpiece,” says Melzer.

The whole community built the puppet, which was designed by Bangladeshi artist Kamruzzaman Shadhin.

This helps connect the Rohingya – many of whom never encountered elephants in Myanmar –  to the animals.

The frame was made of bamboo and built by the men in the community. The women sewed their own used clothes to make a patchwork for the elephant’s skin.

Rohingya children, too, are learning about their big-eared neighbours.

“Elephants are our friends, don’t kill elephants, show them their way,” they sing at a learning centre as volunteers show them how to make elephant masks and teach them facts about the mammals.

Like the rest of the group, he takes his work seriously.

“It makes me very happy to know that the camp residents – almost one million people – depend on us,” he says. “They can sleep well at night, knowing that if an elephant comes, we’ll be there. We feel proud to protect their lives.”