At least three protesters and one policeman have been killed in Iraq‘s southern city of Nasiriya, according to a monitoring group, after nationwide anti-government protests devolved into violence that saw security forces fire live rounds and tear gas for a second straight day.

The deaths on Wednesday came a day after at least two protesters – one in the capital, Baghdad, and one in Nasiriya – were killed and hundreds of people were wounded in clashes between police and protesters angry at  unemployment, corruption and poor public services.

Mustafa Saadoon, director of the Iraqi Observatory for Human Rights, told Al Jazeera three protesters and one policeman were killed in Nasiriya during clashes on Wednesday. At least 78 people were also wounded, he said. 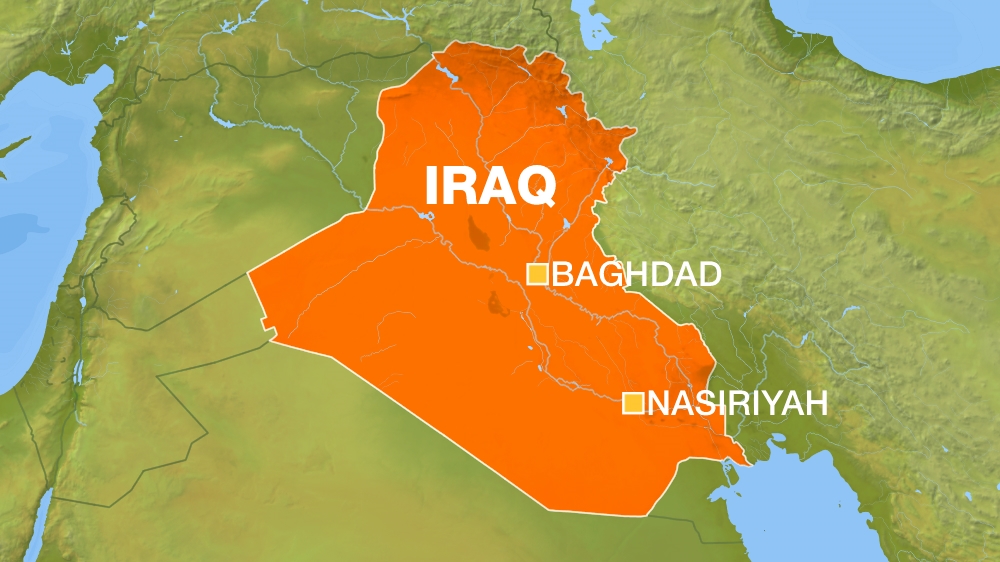 News agencies quoted medical and security sources as saying that the death toll over the past two days stood at nine. The figure could not be independently verified.

Meanwhile, internet blockage observatory NetBlocks said online coverage had been cut off across much of the country, including Baghdad, with connectivity falling below 70 percent.

In the capital, Tahrir Square was sealed off on Wednesday by heavily armed soldiers and dozens of riot policemen, with some demonstrators gathering around the edges. Hundreds of protesters, including university graduates, had rallied there on Tuesday.

Protesters on Wednesday also took to the streets in al-Shaab in north Baghdad and Zafaraniya in the south, with riot police attempting to disperse them with tear gas and live rounds fired in the air.

“I came out today in support of my brothers in Tahrir Square,” Abdallah Walid told AFP news agency in Zafaraniya, where protesters were burning tyres on streets lined with riot police vehicles.

WATCH-Why are Iraqis protesting against the government?

“We want jobs and better public services. We’ve been demanding them for years and the government has never responded,” the 27-year-old said.

AFP, citing medical sources, said some 60 people were wounded across the capital, including nine from bullets.

“All through the evening, we’ve been hearing the sound of gun fire and sirens,” said Al Jazeera’s Imran Khan, reporting from Baghdad. The demonstrations have spread to several cities across the country, with demonstrators in Najaf reportedly setting fire to government buildings, he said.

The Iraqi government has been taken by surprise over the size of the rallies, which were mostly organised on social media, he said, adding: “The government appears to be very concerned about these protests spreading. They are restricting live broadcasts from the protest scene, as well as social media platforms, like Facebook and Twitter.”

Meanwhile, protesters tried to break into the municipality building in the eastern city of Kut, while hundreds took to the streets of Hilla and Diwaniya, according to Reuters.

Thousands gathered in the oil-rich southern city of Basra in front of the provincial administration building but so far protests there were peaceful.

Peaceful protests were also reported in Samawa, while small rallies were held in the northern cities of Kirkuk and Tikrit, as well as in the eastern province of Diyala, Reuters reported.

Abdul Mahdi on Wednesday chaired an emergency meeting of the national security council, which later issued a statement regretting deaths and injuries on both sides during Tuesday’s protests and affirming the right to protest and freedom of expression. It made no mention of Wednesday’s protests.

“The council affirms the right to protest, freedom of expression, and the protesters’ legitimate demands, but at the same time condemns the acts of vandalism that accompanied the protests,” it said.

Appropriate measures to protect citizens, as well as public and private property would be taken, it added.

All military units were placed on high alert, the defence ministry said.

In a statement on Tuesday, the prime minister had promised jobs for unemployed graduates and instructed the oil ministry and other government bodies to start including a 50 percent quota for local workers in subsequent contracts with foreign companies.

According to the World Bank, youth unemployment in Iraq is more than 20 percent.

Ali al-Nashmi, a professor of international relations at the Mustansiriya University in Baghdad, described the latest protests as the “most serious we have seen yet”.

“The protesters are raising many slogans – they want jobs, they want to fight against corruption, they want electricity. They don’t have one slogan or one leader. They are looking for everything. And they are not followers of a specific religious or political party. Therefore it will be difficult to control or negotiate with them.”

Late on Wednesday, Moqtada al-Sadr, a powerful Shia leader who has led previous demonstrations, called for “peaceful protests and a general strike” after calling for an investigation into the violence.

Yusuf Alabarda, an analyst based in Turkey’s Ankara, called the situation in Iraq “very fragile”.

“This is a war-torn country, very close to being a failed state. And there are rivalries among United States, Iran and Turkey. And for these reasons, the situation inside Iraq is very fragile,” he told Al Jazeera.

However, “in the short term, this government will not be able to alter the economic situation,” he said. “But changing governments will not help fight against economic issues, corruption, terrorism or the security threats.”

At least two protesters killed and hundreds injured in Iraq after police clashed with anti-government demonstrators rallying against unemployment and corruption. pic.twitter.com/G5Yn3GZT8m

The United Nations expressed concern over the violence and urged calm, with the special representative of the UN secretary-general for Iraq, Jeanine Hennis-Plasschaert, reaffirming in a statement the right to protest.

Iraq’s President Barham Salih, in a post on Twitter late on Tuesday, also reminded security forces that “peaceful protest is a constitutional right”. He added: “Our young Iraqi children are looking for reform and jobs, and our duty is to meet these legitimate demands.”

Parliament, too, has ordered an investigation into the violence and its human rights committee criticised security forces for their “suppression” of the demonstrations.