‘State of mourning’ in Burkina Faso after attack kills dozens

An armed attack in northern Burkina Faso on Tuesday killed 35 civilians, almost all of them women, the president said, one of the deadliest assaults in nearly five years of violence in the West African country.

Seven soldiers and 80 armed fighters were also killed in the double attack on a military base and Arbinda town in Soum province, the army said.

Burkina Faso, bordering Mali and Niger, has seen a regular target of attacks, which have left hundreds dead since the start of 2015 when the violence began to spread across the Sahel region.

“A large group of terrorists simultaneously attacked the military base and the civilian population in Arbinda,” the army chief of staff said in a statement.

“The heroic action of our soldiers has made it possible to neutralise 80 terrorists,” President Roch Marc Christian Kabore said. “This barbaric attack resulted in the death of 35 civilians, most of them women.”

The president has declared 48-hours of national mourning.

The morning raid was carried out dozens of fighters on motorbikes and lasted several hours before armed forces backed by the air force drove the fighters back, the army said.

No group immediately claimed responsibility for the attack, but religious violence in Burkina Faso has been blamed on fighters linked to al-Qaeda and Islamic State of Iraq and the Levant (ISIL or ISIS) groups.

Leaders of the G5 Sahel nations held summit talks in Niger earlier this month, calling for closer cooperation and international support in the battle against this threat.

Armed violence has spread across the vast Sahel region, especially in Burkina Faso and Niger, having started when armed fighters revolted in northern Mali in 2012.

The Sahel region of Africa lies to the south of the Sahara Desert and stretches across the breadth of the African continent.

The G5 group is made up of Chad, Burkina Faso, Mali, Mauritania and Niger, whose impoverished armies have the support of French forces as well as the United Nations in Mali.

In Burkina Faso, more than 700 people have been killed and about 560,000 internally displaced, according to the UN.

Attacks have hit mostly the north and east of the country, though the capital Ouagadougou has been hit three times.

Prior to Tuesday’s attack, Burkina security forces said they had killed about a 100 fighters in several operations since November.

An ambush on a convoy transporting employees of a Canadian mining company in November killed 37 people.

Attacks have intensified this year as the under-equipped, poorly trained Burkina Faso army struggles to contain the violence. 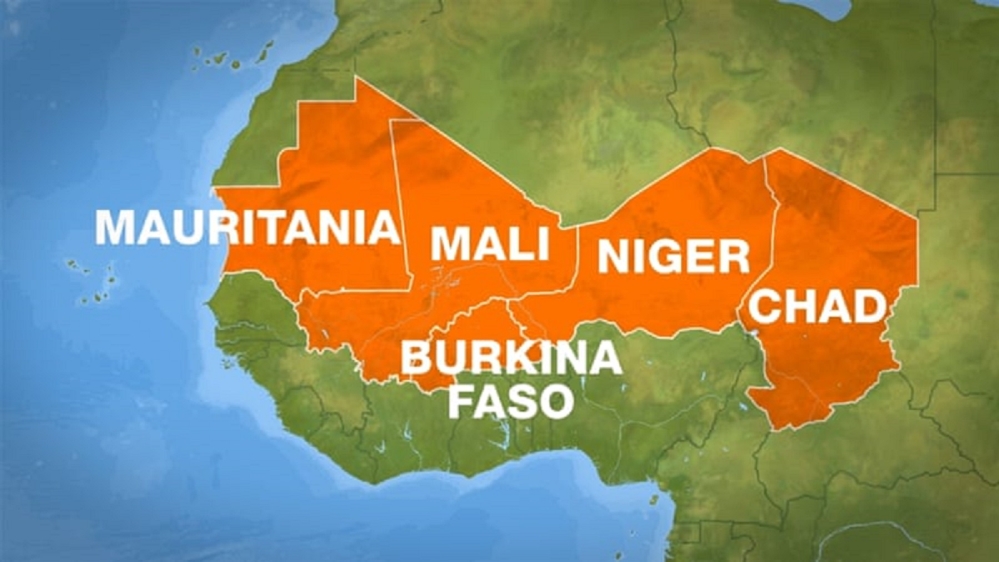