UN calls for ‘prompt and thorough’ probe into Morsi’s death

The UN has called for a “thorough and transparent investigation” into the death of Mohamed Morsi in court, as thousands of people across the Middle East paid their respects to Egypt‘s former president.

The UN human rights office on Tuesday said the investigation should encompass all aspects of his treatment during nearly six years of his incarceration.

Egypt’s first democratically elected president was buried in a small family ceremony early on Tuesday a day after he suffered a fatal heart attack in a Cairo court, his sons said.

“Concerns have been raised regarding the conditions of Mr Morsi’s detention, including access to adequate medical care, as well as sufficient access to his lawyers and family …,” UN human rights spokesman Rupert Colville said in a statement.

“The investigation should be carried out by a judicial or other competent authority that is independent of the detaining authority and mandated to conduct prompt, impartial and effective investigations into the circumstances and causes of his death,” he said.

Morsi was overthrown on July 3, 2013, after barely in power for a year in a coup staged by current President Abdel Fattah el-Sisi and placed under house arrest before being moved to prison.

Morsi’s death has brought an outpouring of condolences from around the Middle East.

“I mourn, for myself and all the free people of the world, the death of a great striver on the path of freedom,” said Tawakkol Karman, joint recipient of Nobel Peace Prize.

Al Jazeera Jamal Elshayyal, reporting from Doha said that hundreds of mourners gathered at a local mosque to pay their respects to the former president.

“The presence of Khaled Meshaal, the former leader of the Palestinian resistance movement, Hamas, is a testament that Morsi is seen as a champion of other causes such as struggle for freedom in Palestine,” he said.

At Istanbul’s Fatih mosque, where thousands joined in prayers, Erdogan called Morsi a “martyr” and blamed Egypt’s “tyrants” for his death, adding that he didn’t believe that Morsi died of natural causes. 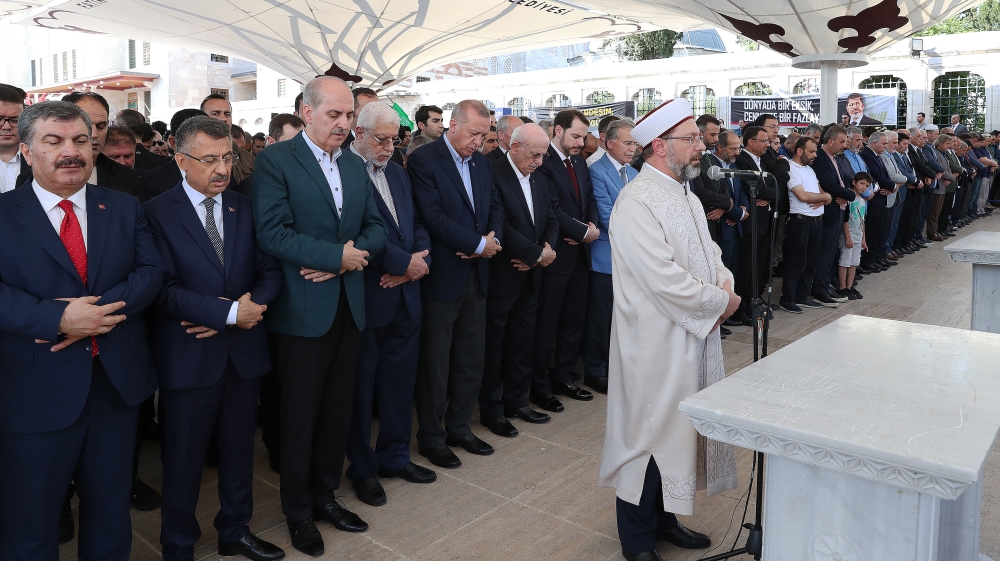 “I don’t believe that this was a normal death,” Erdogan, a key supporter of Morsi, said.

The Turkish president also denounced the Egyptian authorities for burying Morsi discreetly, with only a small number of family members and confidants present.

Journalists were kept away from the burial service in Cairo, while a family request to bury him in his home town was turned down.

But mourners still gathered in the former president’s home province of Sharqiya to pay their respects.

Amr Darrag, a senior member of Brotherhood’s political party who also lives in exile, said: “Sisi is the murderer and there must be a transparent and independent international investigation.”

“The government of Egypt today bears responsibility for his death, given their failure to provide him with adequate medical care or basic prisoner rights,” HRW said in a statement to Al Jazeera.

“The Egyptian government has known very clearly about his declining medical state. He had lost a great deal of weight, he had fainted in court a number of times and was being kept in almost around-the-clock solitary confinement.”

Turkey’s ruling AK Party supported Morsi’s government and many Brotherhood members and supporters have fled to Turkey since its activities were banned in Egypt in 2013.

“There are Arab dissidents and journalists who have been residing in Turkey since the Arab Spring began and people are here to give support for Morsi’s cause,” Al Jazeera’s Sinem Koseoglu, reporting from Istanbul’s Fatih Mosque, said.

At the time of his death, Morsi, 67, faced a host of legal charges, which he, along with many human rights groups and independent observers, said were politically motivated.

Thousands of members of now-outlawed Muslim Brotherhood organisation, who were arrested in the crackdown following the 2012 coup, are still languishing in jails.

Egypt’s government has dismissed accusations that the former president was badly treated.