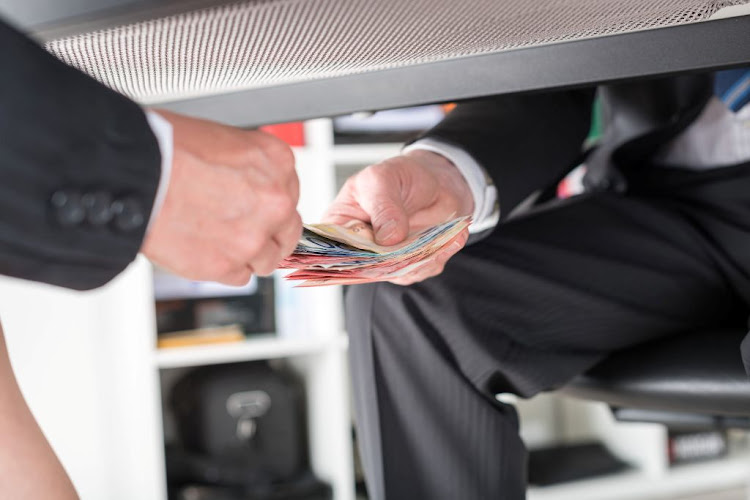 DA councillor Shadow Shabangu says the R1.2m payment he got from the Springs Mall developers was not a bribe. [Image Source: Times Live / 123RF / Thodonal]

DA councillor Shadow Shabangu, who was recently cleared by the party of sexual harassment, has been accused of receiving R1.2m in kickbacks from a developer.

The Sunday Times reported last week that Shabangu was cleared of sexual harassment charges and the female leader who made allegations against him was charged for making false claims.

Shabangu this week admitted receiving R1,220,000 from the developers of the Springs Mall, but denied that it was a bribe.

A report by the Ekurhuleni municipality found that Shabangu, the DA caucus chair in the council, received payments from the developers of the mall.

The council adopted the report last year, but the DA has not taken action against him.

The chair of the DA’s disciplinary committee, Mervyn Cirota, who dismissed the charges against Shabangu, is now representing him as the councillor’s personal lawyer.

The DA’s Gauteng provincial executive chair, Mike Moriarty, said the party had learnt about the report only on Friday following questions from the Sunday Times.

According to the report, adopted by the Ekurhuleni council “in committee minutes” published this year, Shabangu had an illegal contract with the developers for a job he “would otherwise have offered free of charge by being a councillor for the area”.

Shabangu allegedly signed the contract on August 31 2016, a few weeks after being elected to the council after the local government elections in that year.

“As per the contract, Shabangu received a payment of R1,220,000 in different instalments ranging from R30,000 to R510,000 from the 25th of August 2016 [five days before the signature of the contract] to the 26th of April 2017 [over a month after the launch of the mall],” according to part of the council minutes that were backed up this week by the council speaker, Patricia Khumalo.

“The contract required him [Shabangu] to protect the interests of the developer instead of those of the municipality and those of his constituents, which is a direct conflict of interest,” the report said.

“Furthermore, it was found that there might be an existence of a corrupt relationship between the developer and Shabangu, under the veil of the so-called facilitation agreement.”

The report said Shabangu’s actions were in contravention of provisions of section 4 of the Prevention and Combating of Corrupt Activities Act.

Shabangu insists the payment was above board, saying: “I never accepted a kickback, it was payment in terms of a contract.

The council report said that Shabangu should not have entered into such a contract with a company that was doing business with the city by building a mall in Ekurhuleni’s jurisdiction.

Shabangu said it was “not a government contract, neither was it a contract with the city of Ekurhuleni”.

The report said Shabangu misled the council, saying the contract was for consulting services for surveying and planning, whereas the reasons given in the contract were different.

The report said Shabangu also received a gift of a hotel payment worth €120-€160 (about R1,720-R2,290) from a friend of the developers of the mall that he did not declare. Shabangu said this was a loan he was going to pay back “the next day”.

Khumalo said Shabangu’s fate would be decided by the council’s ethics committee, which was processing the evidence and would decide on any action.

“It will either be a reprimand, a suspension or dismissal from council,” she said.

The DA in Gauteng said Shabangu would “shortly” receive a letter asking him to provide reasons why he should not be suspended.

“If these reasons are not sufficiently compelling, he will be placed on suspension. This decision will be made within the next few days,” said Moriarty.

Cirota said he was representing Shabangu. Moriarty said there was no conflict in Cirota appearing for Shabangu. He said it was not the DA provincial disciplinary body that cleared Shabangu, but the provincial executive committee.