Fayyad Abu Rmeleh, 60, is afraid the floor and yard of his home will one day collapse. Every day, he says, from morning until late afternoon, the family hears the digging and drilling of tunnels beneath their building.

The excavations conducted by Israeli authorities first began in 2000, but it was not until five years ago that they began to notice damage to their home.

“It’s putting our lives in danger,” Abu Rmeleh told Al Jazeera. “Wherever you turn your head, you find new cracks. We don’t know how many tunnels are beneath our house, but we believe there are at least three.”

The 50-member Abu Rmeleh family lives in Silwan’s Wadi Hilweh neighbourhood in occupied East Jerusalem, which has been marketed as the “City of David” tourist attraction, where some Israelis say King David of the Bible built the “original city of Jerusalem” some 3,000 years ago.

Underneath their home, Israeli authorities have been digging tunnels, searching for traces of the Second Temple era.

Long, jagged cracks have formed every which way in his home – on the stairs, by the windows in the bathroom and living room, while chunks of the wall in some areas have fallen out.

On the outside of the house, a 1.5-metre-long crack stretches from the ground.

But his nephew’s home, located in the same building, was the most badly damaged. He was forced to move out with his wife and five children in early 2018 as the ground weakened and could barely hold the walls. 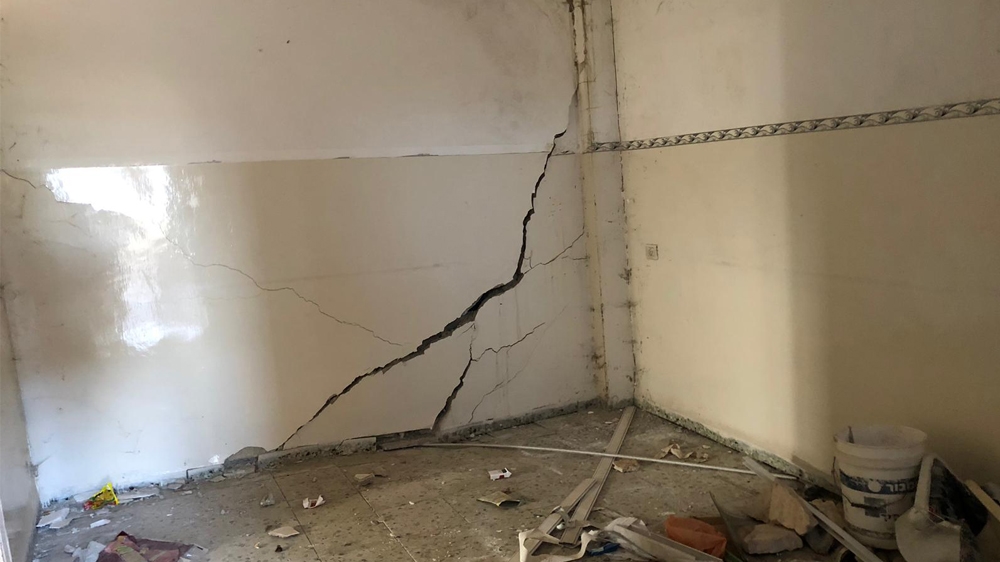 “I’m always afraid, I’m always worried. I ask the children not to play a lot in the yard or to run a lot as the floor is about to collapse any moment,” Umm Jihad, Abu Rmeleh’s wife, said.

Palestinian residents of Silwan have for years been alarmed by the damage their homes have sustained from underground digging.

Israeli officials – including members of the settler organisation Elad that funds the excavations and manages the site – say the route was taken by Jewish pilgrims on the way to the Second Temple, believed to have been situated where the Al Aqsa compound is located.

The Palestinian Authority condemned the presence of US officials at the inauguration calling the event part of the “Judaisation” of Jerusalem.

White House adviser Jason Greenblatt responded in a tweet that the claim was “ludicrous”, adding, “We can’t ‘Judaise’ what history/archaeology show. We can acknowledge it you can stop pretending it isn’t true! Peace can only be built on truth.”

While Greenblatt and members of Elad are confident the new tunnel served as a pilgrim route leading to the Second Temple, many archaeologists are not, Jerusalem-based Yonathan Mizrachi noted in an article.

Mizrachi, CEO of the Israeli NGO Emek Shaveh, told Al Jazeera the tunnels that Israelhas excavated in and around the Old City and in Silwan are “problematic”.

To date, no academic or scientific report has been published on the tunnels, nor has any data been released as to what has been discovered. Regarding the “Path of the Pilgrims”, there is no certainty regarding the dating of the drainage channel, according to Emek Shaveh.

Furthermore, the tunnels have been excavated horizontally, breaking in practice with the 100-year-old accepted method of excavating vertically from the surface down, the method used by archaeologists worldwide, Mizrachi said. Information obtained from horizontal excavations is almost worthless.

“When you excavate horizontally, you don’t have the ability to understand exactly how the periods have developed in the soil; you don’t properly understand what you find because you look at it from a section to the side, not from above,” Mizrachi said.

“It’s not the way to do archaeology. When you excavate horizontally, it’s bad from the beginning.”

Previously, two senior officials of the Israel Antiquities Authority, Jon Seligman and Gideon Avni, criticised the excavation of tunnels, saying contrary to accepted practice, it’s “bad archaeology” and “the authority could not be proud of this excavation.”

The latest inauguration is emblematic of a larger problem – visitors at Israeli archaeological sites conducted in occupied East Jerusalem are being told the excavations are exclusively related to Jewish history, ignoring the different multicultural chapters of Jerusalem’s history such as the Byzantine and Umayyad periods.

“The people at the Elad Foundation are creating an imaginary historical reality that is shaped by their religious beliefs and nationalist goals, rather than by the archaeological finds and other historical evidence,” Emek Shaveh noted in its 2017 report.

For instance, at the popular Western Wall Tunnels, remains from periods not related to Jewish history mostly go unmentioned for visitors even while archaeologists agree most of the remains post-date the destruction of the Second Temple, according to Emek Shaveh.

In reality, most of the excavations at the Western Wall Tunnels are below strata that are entirely Muslim, Mamluk structures from the 14th and 15th centuries, Mizrachi noted.

Yet, the narrative told to visitors almost exclusively focuses on the history of the Second Temple. 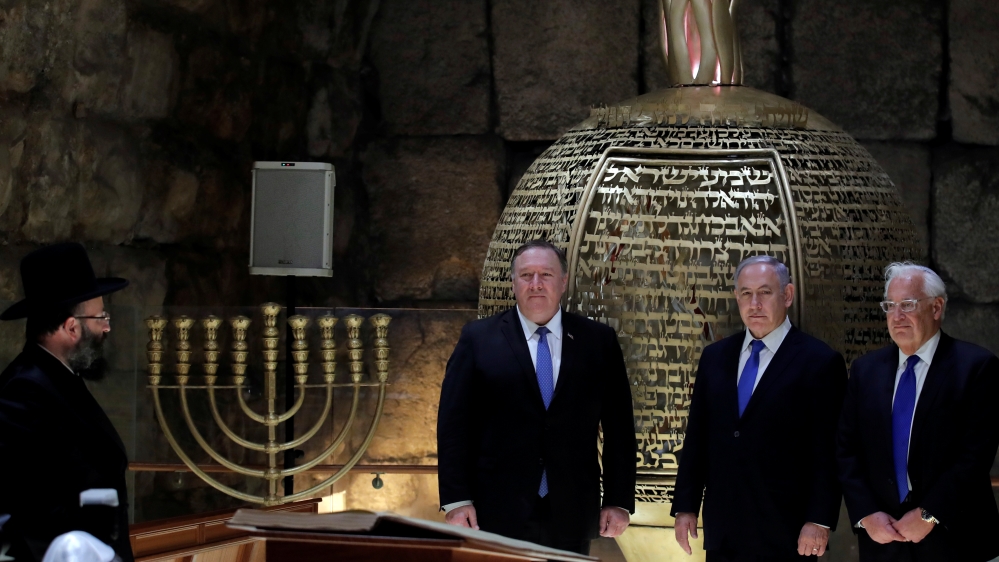 One of the largest spaces excavated in the Western Wall Tunnels is a 14th-century hammam (bathhouse) from the Mamluk period.

Yet, it’s been converted into an exhibition on Jewish ancestry, dedicated to telling the story of Jewish pilgrimage to Jerusalem, “thus completely ignoring the historical significance of the site in which it is situated”, Emek Shaveh wrote.

There is no sign for the visitor to know it’s a Mamluk structure or that it was built by the governor of Damascus, Sayf al-Din Tankaz, who was responsible for some of the more impressive buildings of the time, Mizrachi wrote in an article.

Similarly in 2012, the Israeli government decided to plan a Bible Centre at the entrance to Silwan, which would feature biblical stories and their centrality for Israelis.

Yet, no significant remains from biblical periods have been discovered at the site, according to Emek Shaveh.

Digging continues under Palestinian homes in Silwan to find historical proof of King David to market it for the “City of David”, despite the fact archaeologists dispute the evidence of a kingdom in the 10th century BCE.

“There’s a very strong debate among archaeologists as to what happened in Jerusalem in the 10th century BCE, the time that I understand as the time of the David and Solomon Kingdom,” Mizrachi said.

“The archaeological evidence is very little and doesn’t give us a picture of a proper city or, definitely not a wide, big, important city.

“We’ve had 150 years of excavation [looking for the city of David], there’s definitely still a lot of missing evidence regarding to the time of David and Solomon. That’s definitely a problem.”

Mizrachi said the tunnel excavations are “all part of a political agenda”.

“Unfortunately, Israel is using these tunnels disguised as archaeological excavations but it’s actually part of the political goal to prevent Jerusalem from being part of any political solution,” Mizrachi said.

For the Abu Rmeleh family, they say their lives are in danger but they don’t know who to turn to for help.

Aside from the cracks their building has sustained, they also found a hole in their nephew’s home leading to the tunnels.

“We covered it with this wood and some stones because we’re afraid of what could come out of this hole,” Abu Rmeleh said. 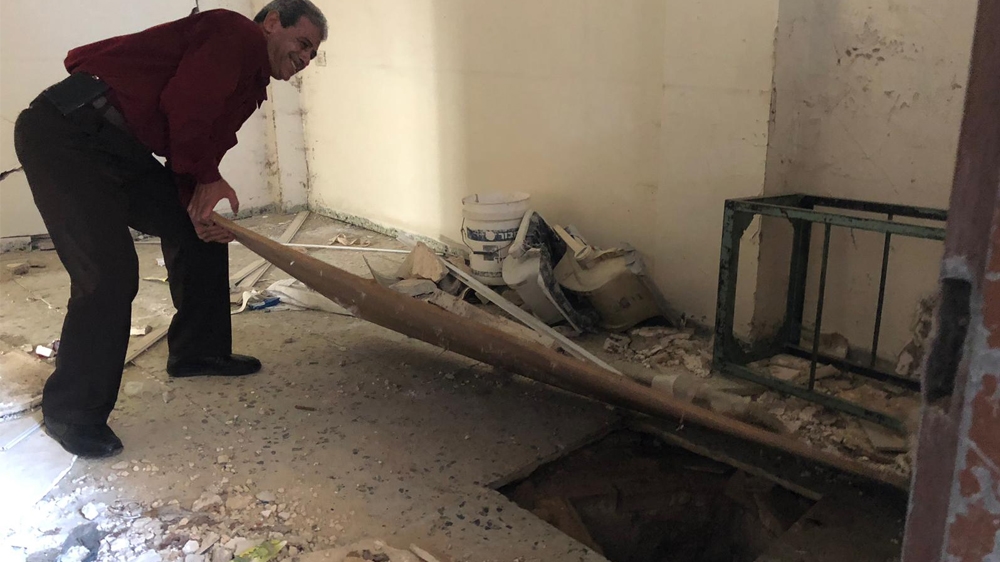 In March, Ma’an news agency reported a playground in Silwan had collapsed as a result of 12 years of excavations underground.

“The most important thing in a person’s life is to live in safety and stability. A house should be the place where we can feel [safe], but it’s not in our case,” Abu Rmeleh said, adding they will continue living in the building despite the fragility.