“As per the order there shall be no movement of public and all educational institutions shall also remain closed,” a statement by the government of Jammu and Kashmir, which is currently under the central rule, said on Sunday night.

The order said the indefinite security restrictions will be applicable in the main district of Srinagar.

Indian media reports said some pro-India leaders from the region, including former chief ministers Mehbooba Mufti and Omar Abdullah, have been placed under house arrest.

The measures came after the Indian government moved 10,000 troops to the region last week, followed by an unprecedented order asking tourists and Hindu pilgrims to leave the Himalayan valley.

Residents fear New Delhi is planning to engineer “demographic changes” in India’s only Muslim-majority region by scrapping a law that prohibits outsiders from buying land in India-administered Kashmir.

Jammu & Kashmir Government: There will be a complete bar on holding any kind of public meetings or rallies during the period of operation of this order. It should be noted that there will be no curfew in place as reported in a section of the media. https://t.co/EGENEM6qUz

Concerns over Article 35A

Earlier on Sunday, former state Chief Minister Farooq Abdullah chaired a meeting of political leaders from the region, who issued a statement, warning “against any tinkering with the special status of the region” as guaranteed under Article 35A of the Indian constitution.

The statement said the region’s political parties “remain united … in their resolve to protect the autonomy and special status” of Kashmir.

Article 35A has been challenged by the ruling Bharatiya Janata Party (BJP) and its right-wing allies through a series of petitions in India’s Supreme Court.

Last month, a senior BJP leader hinted that the government was planning to form exclusive Hindu settlements in the region.

Syed Ali Geelani, a top separatist leader, also issued a statement on Sunday, calling on Kashmiris to use “unity and brotherhood” to fight “India’s aggression”.

How ironic that elected representatives like us who fought for peace are under house arrest. The world watches as people & their voices are being muzzled in J&K. The same Kashmir that chose a secular democratic India is facing oppression of unimaginable magnitude. Wake up India

The latest spate of tensions began last week after India sent 10,000 more troops to what is already one of the most militarised regions in the world.

Nearly 700,000 Indian soldiers are deployed in India-administered Kashmir, where civilian protesters and armed rebels either want freedom or merger with Pakistan.

Both India and Pakistan claim the region of Kashmir in full and have fought two of their three wars over it.

The Jammu and Kashmir state government’s order effectively cancelled a major Hindu pilgrimage held in a Himalayan cave temple for 45 days every year. 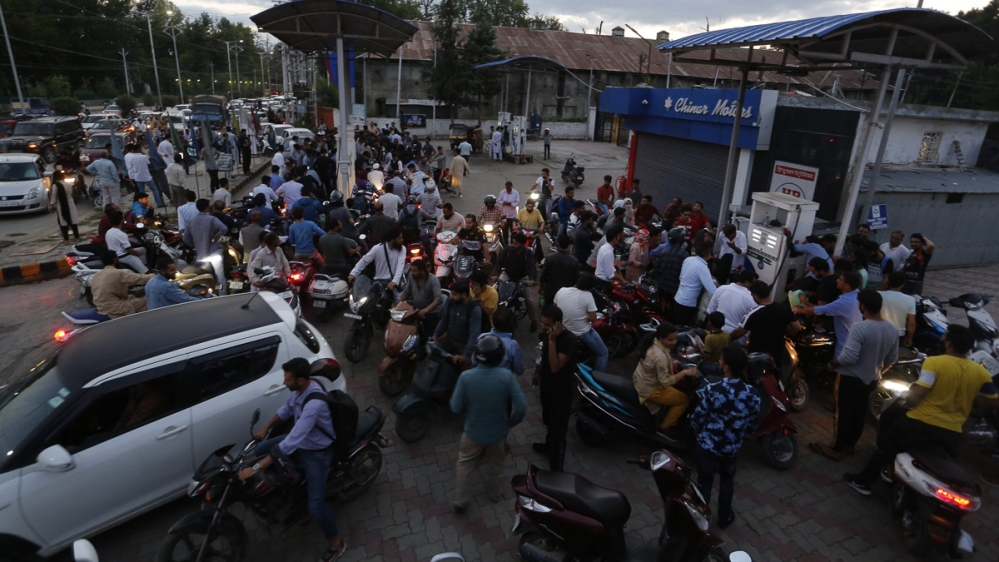 Saniya Nisar, 28, is anxious and uncertain about her wedding scheduled on August 17. Exhaustive preparations have been made. But her family has no idea what is in store in the next few days.

The recent measures citing “terror threats” sparked fear and panic among the residents in India-administered Kashmir, which witnesses near-daily clashes between the rebels and security forces.

On Sunday, long queues were seen outside petrol stations, food and medical stores, and ATMs in the main city of Srinagar as residents rushed to stock fast depleting supplies before the Muslim festival of Eid-ul-Azha which falls on August 12.

Many residents told Al Jazeera that after the advisories were issued, they lost interest in the festivity and were instead working on stockpiling essential rations and fuel.

Some of the government orders issued in the past week included directions to the doctors to remain prepared, to non-local students to leave for home, and district administrators to remain on standby.

Even as the Kashmir valley witnesses frequent spells of unrest, the latest tension has left many worried about an “uncertain future”.

Nisar Ahmad said he lost his last job with a Srinagar-based pharmaceutical company, which shut its business following the widespread unrest in 2016.

A father of two children, Ahmad feared he will again become jobless if the current situation deteriorates. 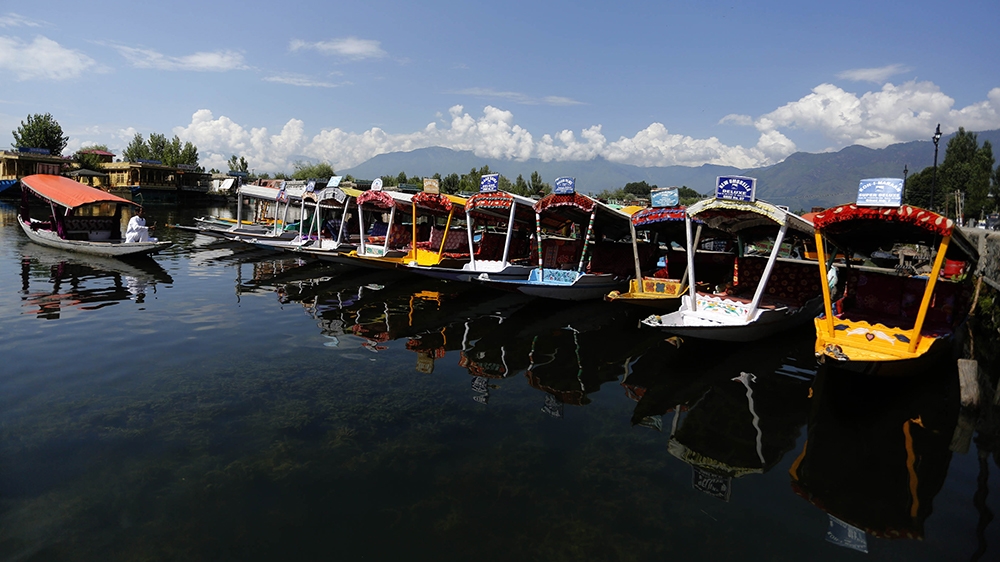 Abdul Rasheed, a houseboat owner at the famous Dal Lake in Srinagar, looked visibly distressed on Saturday while dozens of trucks with armed forces passed the road.

The boats, which take tourists on a joyride, were empty, while houseboats that were booked for months had been vacated.

“We have a loan to pay. We are at the beginning of the [tourist] season and we are unsure of what to do,” he said.

“Some tourists feel sad for us and do not want to leave, but we insist that they go because we do not know what India is planning here.”

Another boatman, Mushtaq Ahmad, said 1,200 houseboat owners in Dal Lake and more than 3,000 boatmen depend on tourism for their livelihoods.

“What is the government going to do for us?” he asked.

Meanwhile, along the Line of Control (LoC), a heavily militarised de facto border that divides Kashmir between India and Pakistan, there was a fresh surge in hostilities between the nuclear-armed neighbours.

The Indian army on Sunday said a “number of attempts by Pakistan to disturb peace in the valley” were witnessed in the last 36 hours, but Pakistan denied it.

“A BAT [Pakistan’s Border Action Team] attempt was made on one of the forward posts in Keran sector and foiled by alert troops resulting in the neutralizing of 5-7 Pakistani terrorists,” Indian army spokesperson Rajesh Kalia said in a statement.

Pakistan’s Prime Minister Imran Khan tweeted that the situation had the potential to “blow up into a regional crisis”.

“The only road to peace and security in South Asia runs through a peaceful and just settlement of Kashmir,” he posted.

It is time to end the long night of suffering for the people of Occupied Kashmir. They must be allowed to exercise their right to self determination according to UN SC resolutions.The only road to peace & security in South Asia runs through a peaceful & just settlement of Kashmir

Khan discussed the situation in a meeting with military officials on Sunday, while his Indian counterpart Narendra Modi is expected to hold a similar meeting on Monday.

Residents along the LoC said the artillery shelling in recent days has given them sleepless nights as they feared “another war”.

“When it gets dark, we fear the situation will get worse. The nights are horrible,” said Dilshada Begum, 50, a resident of north Kashmir’s Balkote village.

Some 70,000 people, mostly civilians, have been killed in the last three decades of armed conflict in India-administered Kashmir.