The army behind Libya‘s UN-backed government has announced a counteroffensive to defend Tripoli, vowing to reclaim all areas seized by forces loyal to renegade General Khalifa Haftar, who have been marching on the outskirts of the capital.

Colonel Mohamed Gnounou told reporters in Tripoli on Sunday that the counteroffensive, dubbed “Volcano of Anger”, was aimed at “purging all Libyan cities of aggressor and illegitimate forces”.

The announcement came as Haftar’s forces said they conducted the first air raid on a Tripoli suburb as part of their aim to overthrow the internationally-recognised Government of National Accord (GNA) and control Tripoli.

The Health Ministry of the U.N.-backed Libyan government said on Sunday that clashes in the southern part of Tripoli resulted in 11 killed and 23 wounded.

Meanwhile, the UN mission in Libya (UNSMIL) made an “urgent appeal” for a two-hour truce in the southern suburbs to evacuate the wounded and civilians caught in the fighting.

“[UNSMIL calls on] all armed parties in the Wadi Rabi area, Al-Kayekh, Gasr Ben Ghachir and Al-Aziziya to respect a humanitarian truce [between 14:00 and 16:00 GMT] to secure the evacuation of wounded and civilians by rescue teams and the Libyan Red Crescent.”

Fearing that large-scale fighting could break out, the city’s residents have begun stocking up on food and fuel.

At least 35 people, including civilians, have been killed on both sides since Haftar launched his offensive four days ago.

The health ministry of the Tripoli-based government said in a statement that at least 21 people were killed, including a doctor, and 27 others were wounded.

Ahmed al-Mesmari, a spokesman for Haftar’s forces, said on Saturday that 14 troops were killed.

The GNA controls Tripoli, situated in northwestern Libya, while the LNA is allied to a parallel administration based in the east of the oil-rich country, which splintered into a patchwork of competing power bases following the overthrow of former leader Muammar Gaddafi in 2011. 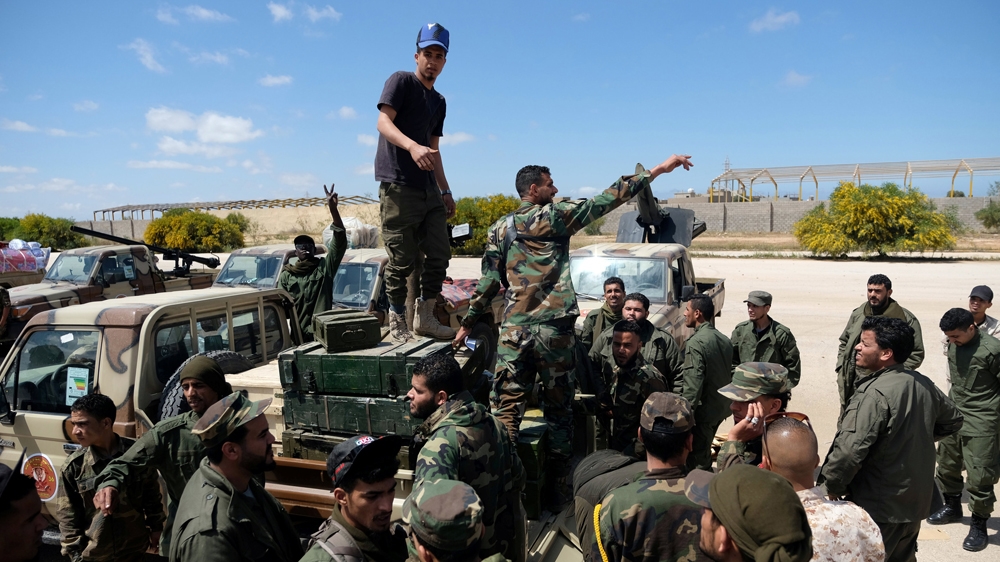 On Sunday, the US military said it had temporarily pulled some of its forces out of Libya amid the upsurge in fighting in the North African country.

“Due to increased unrest in Libya, a contingent of US forces supporting US Africa Command temporarily relocated from the country in response to security conditions on the ground,” it said in a statement.

It did not detail how many military personnel had been withdrawn from Libya.

It said it would “continue to monitor conditions on the ground in Libya and assess the feasibility for renewed US military presence as appropriate”.

“The security realities on the ground in Libya are growing increasingly complex and unpredictable,” said US Marine Corps General Thomas Waldhauser, commander of US Africa Command.

“Even with an adjustment of the force, we will continue to remain agile in support of existing US strategy.”

On Saturday, the head of the GNA accused Haftar of “betraying” him after the latter launched his military offensive on Tripoli.

In a televised speech, Fayez al-Sarraj said Haftar’s forces would meet firm resistance from forces loyal to the GNA.

“We have extended our hands towards peace but after the aggression that has taken place on the part of forces belonging to Haftar and his declaration of war against our cities and our capital … he will find nothing but strength and firmness,” al-Sarraj said. He also warned of “a war without winners”.

Al-Sarraj and Haftar held talks in Abu Dhabi in late February, their first confirmed meeting since November 2018, during which they agreed that national elections were necessary, according to the UN.

“They also agreed on ways to maintain stability in the country and unify its institutions,” the UN Libya mission said in a Twitter post after the Abu Dhabi meeting.

Jason Pack, the founder of consultancy organisation Libya Analysis, argued that the goal of Haftar’s offensive was not to capture Tripoli but make a statement before a UN-sponsored national conference scheduled for later in April.

“It is a media conflict. Haftar is posturing before the national conference. He’s parading his troops, he’s making a few air strikes here, trying to control some strategic points but not trying to conquer the city by force as he’d like to have us believe,” Pack said.

“I think that the UN and the international community has doubled down on this conference, that they’re not going to be swayed by violence and spoilers and that they have a plan.

“The problem is that there is a lot of dissension within international ranks. It’s actually quite shameful now. The French do one thing with their statements and do another thing on the ground and there are other actors who are saying we support the UN position but actually are known to be supporting on the side or factions.”