Trains from Park Station to Naledi in Soweto were the latest services to resume, with three travelling the route each way daily.

This is a far cry from the almost 200 trains that ran between Park Station and Soweto in the 1980s.

While the trains used on the Naledi route are the standard yellow-and-grey Metrorail electric train sets, they are hauled by Prasa-owned diesels as most of the overhead power cables were stolen on the Gauteng commuter rail network.

Meanwhile, commuter services from Cape Town to Simon’s Town are expected to resume in February once damaged masts at Glencairn have been repaired, said Nana Zenani, acting spokesperson for Metrorail Western Cape.

Services from Retreat to Fish Hoek had only restarted on December 21 after a nearly two-month stoppage caused by cable theft on the line in October.

Metrorail security caught one of two people as they were “cutting 11kV lines between Retreat and Fish Hoek Stations”, Zenani said.

“All this work took place before the electric lines could be strung up and switched on to allow for operations,” she said.

As well as the southern line, commuter trains are also running on the northern line.

However, the critical central line between Cape Town and Chris Hani and Kapteinsklip remains out of service. The line, which once carried 220,000 commuters daily, is the worst-affected of the city’s passenger rail networks.

Vandals have stolen electrical infrastructure, overhead lines, substations and rails while in many areas informal settlements have been built over the tracks.

In Gauteng, formerly SA’s busiest commuter rail network, just four routes are operating. Along with the Park-Naledi shuttles, there are also services between Germiston and Vereeniging, Elandsfontein to Thembisa and Pienaarspoort to Pretoria.

Services between Pretoria and Mabopane and Ga-Rankuwa are also expected to resume early in 2022, though Prasa had not confirmed a date.

The Gauteng rail network was heavily vandalised during the various stages of lockdown.  Thousands of kilometres of overhead power cables, signal and telecommunications wiring were stolen by thieves who strip copper from the cables and sell it to scrap dealers.

Station buildings were also stripped and looted, with people making off with doors, window frames, roof sheeting and even bricks.

Ongoing cable theft also raised questions on whether the new electric commuter train sets being built by the Gibela consortium could be placed in service.

The R51bn contract will see 600 new electric trains built by 2029 to replace Metrorail’s decrepit train sets, many of which entered service more than 60 years ago. 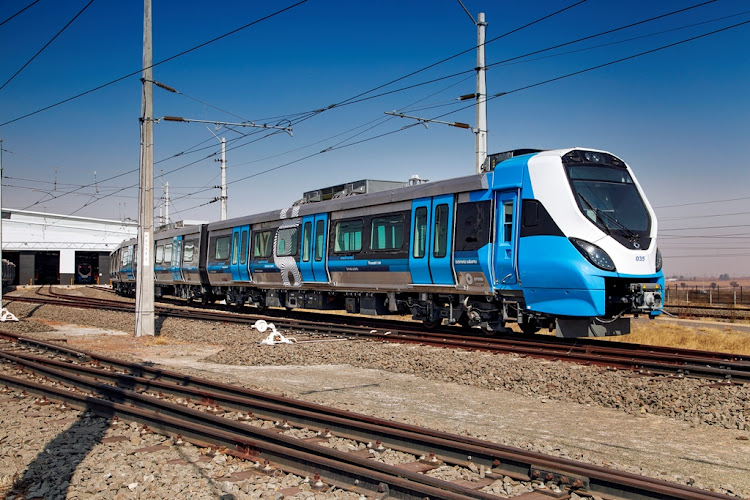 One of the new Xtrapolis electric train sets seen at the Gibela plant near Springs.
Image: GIBELA

While the company has already supplied dozens of the new hi-tech Alstom Xtrapolis trains from its purpose-built factory at Dunnottar, south of Springs, many have been stored pending repairs to the overhead power network.

“If not brought under control, it will impact on the utilisation of the trains, including Gibela’s new trains, which would not be ideal for the country,” Jiya said at the time.

Production at the Dunnottar plant began in late 2017. The first 20 trains were built at Alstom’s Brazil plant and shipped to SA while the rest are being built locally.

A number of the new trains were transferred to Cape Town, where they are in use on the route from the city to Fish Hoek.

The new trains are also expected to be used on the newly repaired Pienaarspoort corridor, as well as on the Mabopane trains when they begin running.