Rival Afghans will meet starting on Sunday in Qatar, officials said, in a fresh attempt to make political headway as the United States seeks a peace deal with the Taliban within three months.

The international efforts to bring warring Afghan sides to the negotiating table comes as the Taliban, which has been fighting the West-backed Kabul government, killed 16 in the latest attack in the capital.

The US special peace envoy for Afghanistan Zalmay Khalilzad has been holding a seventh round of peace talks with the Taliban in Qatar, aimed at bringing the 18-year-old war to an end.

“… we will begin the talks to the Afghan sides, but we will not talk to the Kabul administration as a government”

On Monday, US President Donald Trump said in an interview that he wants to withdraw US forces from Afghanistan, but will leave a strong intelligence presence in the country to counter what he termed the “Harvard of terrorists.”

READ MORE-US-Taliban talks for peace in Afghanistan: What we know so far

The Taliban have refused to negotiate with Afghan President Ashraf Ghani, and a previous attempt to bring the armed group together with government officials in Doha collapsed in April in a dispute over attendees.

Germany, a key player in international support for the post-Taliban government, and Qatar, which maintains contacts with the armed group, said that they jointly extended invitations for a dialogue in Doha on Sunday and Monday.

The Afghans “will participate only in their personal capacity and on an equal footing,” Markus Potzel, Germany’s special representative for Afghanistan and Pakistan, said in a statement released on Monday by the US.

“Afghanistan stands at a critical moment of opportunity for progress towards peace,” he said.

But the Taliban spokesman insisted that they would not to talk to the Kabul government.

The meeting comes after US Secretary of State Mike Pompeo paid a previously unannounced visit last week to Kabul where he voiced hope for a peace deal with the Taliban “before September 1.”

The ambitious timeframe would allow a deal before Afghanistan holds elections in September, which Western officials fear could inject a new dose of instability.

Trump wants to pull all US troops from Afghanistan, believing that the US’s longest war – launched after the September 11, 2001 attacks – no longer makes military or financial sense.

But he said the US will “be leaving very strong intelligence, far more than you would normally think,” in an interview with the Fox New Channel’s “Tucker Carlson Tonight.”

“It just seems to be a lab for terrorists … I call it the Harvard of terrorists,” Trump said.

The Taliban have refused to halt their violence, believing that they have an upper hand as the US is eager to leave.

On Monday, at least 16 people were killed and dozens wounded – including 50 children – after the Taliban hit the defence ministry with a powerful bomb.

Gunmen then stormed a nearby building, triggering a gun battle with special forces. Most of the injured children were hurt by flying glass, officials said. 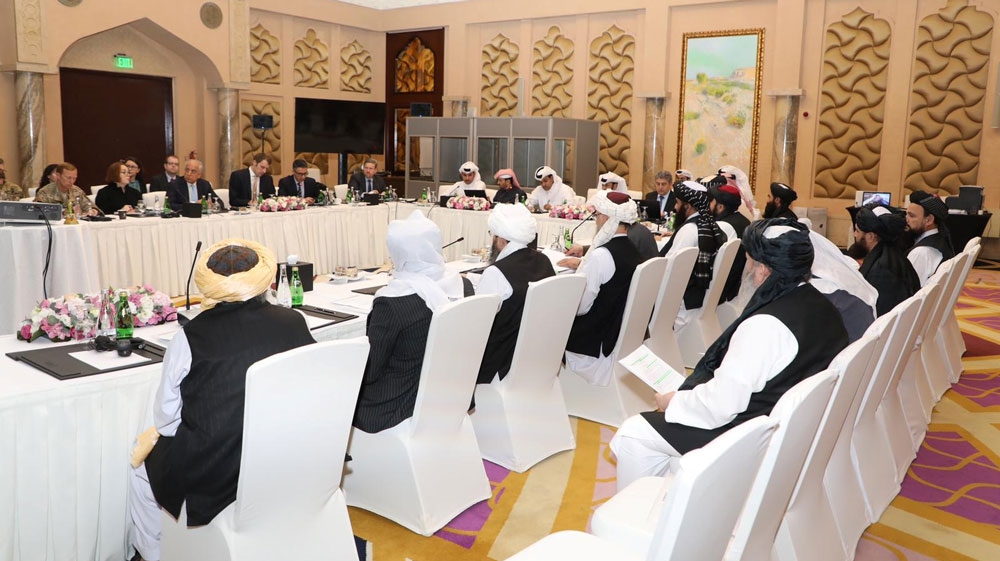 Save the Children branded the attack “utterly deplorable,” warning that “children’s smaller bodies sustain more serious injuries than adults” and that the trauma of such attacks can stay with them for years.

Washington condemned the “brazen” and “callous” attack, but continued the seventh round of talks with the Taliban in Doha that started on Saturday.

“Once the timeline for the withdrawal of foreign forces is set in the presence of international observers, then we will begin the talks to the Afghan sides, but we will not talk to the Kabul administration as a government,” tweeted Suhail Shaheen, the spokesman of the Taliban’s office in Qatar.

Under a peace deal, the US plans to pull its roughly 14,000 troops from Afghanistan.

In return, the Taliban would provide assurances that they would never allow their territory to be a base for foreign attacks – the primary reason for the US invasion in 2001.

Zalmay Khalilzad, the US negotiator with the Taliban, said that dialogue among Afghans was an essential part of a peace deal.

“Mutual acceptance, seeking consensus, and agreeing to resolve political differences without force is what is needed to learn from the tragedy of the last 40 years,” Khalilzad said, referring to Afghanistan’s nearly incessant conflict since the Soviet invasion in 1979.

“I wish participants success,” he tweeted.