The United Nations chief has expressed concern over “restrictions” in Indian-administered Kashmir as the Muslim-majority territory remained under an unprecedented security lockdown and a near-total communications blackout for a fourth day.

The statement by Antonio Guterres on Thursday came as Narendra Modi, the prime minister of India, defended the controversial stripping of special rights from the disputed region as necessary to stop “terrorism and separatism”.

Hundreds have been arrested since Monday, according to local media, in the wake of the decision by Modi’s Hindu-nationalist government to downgrade the portion of Kashmir it administers from statehood to a territory, limit its decision-making power and eliminate its right to its own constitution.

Guterres said he was “concerned over reports of restrictions on the Indian-side of Kashmir”, adding the curbs “could exacerbate the human rights situation in the region”.

The UN secretary-general also appealed for “maximum restraint” and urged India and Pakistan “to refrain from taking steps that could affect” the region’s status.

New Delhi’s move has heightened tensions with Pakistan, which has expelled the Indian envoy in Islamabad, halted the cross-border train service and banned Indian films in protest against what it called an “illegal move”.

Kashmir is claimed in full by both India and Pakistan, although each controls only a part of it.

The contesting claims have led to two of the three wars between the neighbours being fought over Kashmir. India has also accused Pakistan of supporting rebel groups who have been fighting Indian rule in the portion it administers.

In New Delhi, meanwhile, an activist filed a petition at the Indian Supreme Court challenging the curfew in Kashmir, and requesting the release of people who have been detained as part of the crackdown.

University professors, business leaders and activists are among the 560 people rounded up by authorities and taken to makeshift detention centres – some during midnight raids – in the cities of Srinagar, Baramulla and Gurez, the Press Trust of India and the Indian Express reported.

Thousands of paramilitary police on Thursday remained deployed in Kashmir’s largest city, Srinagar, and schools were shut and roads and neighbourhoods barricaded to stop public demonstrations against the sweeping changes.

Security will be even tighter for Friday prayers, police said.

In his first nationally broadcast speech since his government’s move on Monday, Modi did not address the lockdown but assured residents of the region that the situation will soon “return to normal gradually”.

But the recently re-elected prime minister, whose Hindu-nationalist Bharatiya Janata Party (BJP) had pledged to scrap Article 370 of the Constitution during the election campaign, gave no specifics.

Defending his government’s move, Modi argued the constitutional provision that guaranteed Kashmir’s special rights had “not given anything other than terrorism, separatism, nepotism and big corruption”.

Accusing Pakistan of using Kashmir’s special status “as a weapon to incite people of the region against India”, he added: “I have complete faith under this new system we all will be able to free Jammu and Kashmir of terrorism and separatism.”

With Kashmir now fully part of the Indian union, the region would enjoy more jobs, corruption, and red tape, he said, adding that key infrastructure projects would be expedited.

Since the announcement of the revocation of Article 370 by India’s Home Affairs Minister Amit Shah, social media has been flooded with purported advertisements offering plots of lands for sale in Indian-administered Kashmir.

“This government claims that such a move was necessary for the full integration of the state and for its prosperity and development. But you see the mentality of the Indians, they are more interested in land than in the people of Kashmir,” Syed Muntazir, a Kashmiri student at New Delhi-based Jamia Millia University, told Al Jazeera on Tuesday at a protest against the move in the Indian capital.

“Since yesterday, my friends from different parts of India and in the university have called to ask about the land rates in Srinagar, Anantnag and other parts of the region. They want me to tell them which is the best place to buy land.”

Critics of the BJP have also accused it of changing the constitution to shift Jammu and Kashmir’s demographics – it is currently majority Muslim – as well as to pander to its Hindu nationalist base, which has long demanded the right to own property in Kashmir. 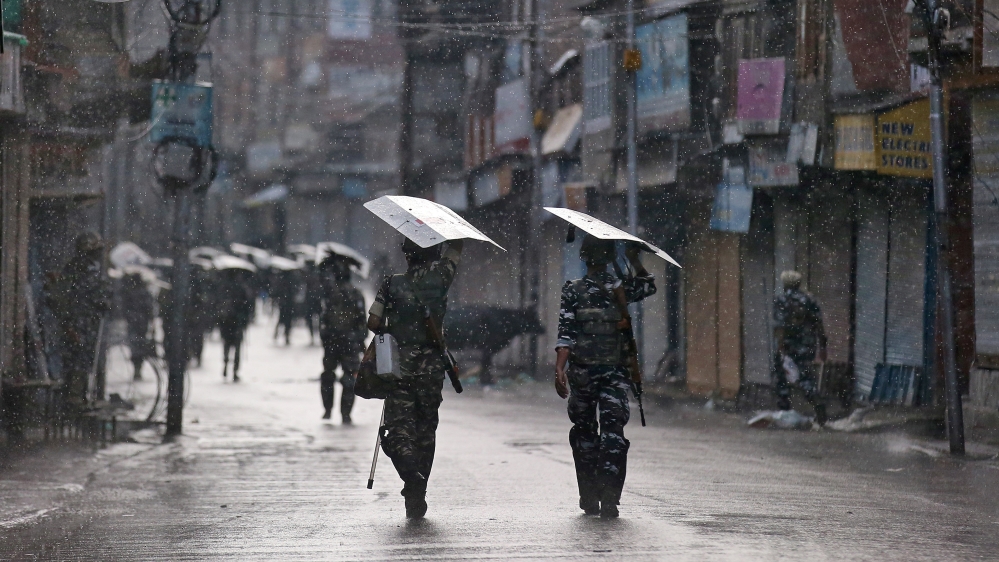 Indian security forces personnel patrol a deserted street during restrictions after the government scrapped special status for Kashmir, as it rains in Srinagar [Danish Ismail/ Reuters]

In Islamabad, Pakistan’s Foreign Minister Shah Mehmood Qureshi ruled out a military confrontation. “Pakistan is looking at political, diplomatic and legal options,” he said. “We’re not looking at the military option. We’re not.”

Islamabad has also promised to take the matter to the UN Security Council, while Pakistani Prime Minister Imran Khan displayed his anger in a series of tweets calling for international action.

“What should be obvious is the intl [international] community will be witnessing the genocide of the Kashmiris,” Khan posted in one tweet.

Shruti Kapila, lecturer in history at the Cambridge University in the UK, expressed doubt over the international community’s willingness to act.

India’s move comes amid a United States’ decision “to move away from the region,” she said, noting plans for a withdrawal of troops from Afghanistan.

“There is also no real international or multi-lateral body to which this can be addressed to,” she said, adding that there was “widespread popular support” inside India for the Modi government’s decision.